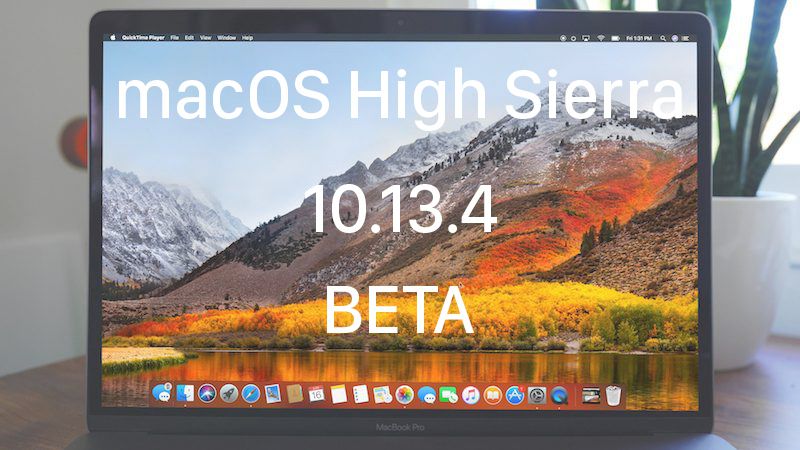 macOS High Sierra 10.13.4 includes bug fixes and performance improvements for issues that weren't addressed in macOS High Sierra 10.13.3. The update includes support for some features that are also available in iOS 11.3, like Messages on iCloud, which uploads all of your iMessages to the cloud. It will also support Business Chat, a feature coming when iOS 11.3 and macOS 10.13.4 are released to the public.

The new macOS update also includes the smoke cloud wallpaper that was previously only available on the iMac Pro, and it introduces a warning when opening up a 32-bit app as part of an effort to phase them out.

In the future, Apple plans to phase out 32-bit Mac apps, just like it did with 32-bit iOS apps. Apple says macOS High Sierra is the last version of macOS that will support 32-bit apps without compromises.

mzeb
This release also has a lot of goodies for eGPU owners. We can now attach remove the egpu without a logout. Also clamshell mode is now supported. Looking forward to the final version to install on my production computer.
Rating: 7 Votes

Clearly, Apple needed another four months—plus even more time to finish the other features.

When MacOS 10.13.3 came out, we upgraded 3 MacBook Pro's (2 x 15 inch retina 2012 and one 2014 13 inch). All MacBooks experienced a mayor drop down in performance. It was like thick sirup against the wind running uphill. We all downgraded to Sierra and got our performance back. So my advice? Do not upgrade 'older' Macs. I really hope High Sierra or it's successor wil have way better performance...

I think it always depends on the specific machine. Since the window server is now Metal2 instead of OpenGL I got a huge performance boost with High Sierra.
Rating: 3 Votes

They actually did rewrite a significant amount of under the hood code between Sierra and High Sierra.


If they hadn’t, they’d be accruing more and more technical debt. You can’t just keep piling on.

I know it’s hip to hate on discoveryd, but the fact that it was ultimately reverted may be a bad sign for the long-term
quality of Bonjour. They couldn’t make a rewrite work, so they had to tack Continuity (Handoff, AirDrop, etc.) on to the existing core, which is now a decade and a half old. That’s not so great. And guess where I do have flakiness? In Continuity.
Rating: 3 Votes

m_emelchenkov
It's interesting, have they fixed "black boxes" bug with Intel HD cards and non-default ICC profiles?
I truly believe they should stop releasing new version of OS every year. They just have lack of resources to polish it good enough.
Rating: 2 Votes

parsonsmike
can anyone tell me whether there’s any reason to upgrade to HS yet?

I had a 2016 MBP and I upgraded it to 10.13.1, which was a hot mess. There were all sorts of instability issues, finder slowdowns, just general ugliness. But then I sold that machine, downgraded to a 2015 MBP, which came with Sierra on it. I haven’t upgraded back to HS because my earlier experience was so awful.

Again, serious question here: 10.13.1 was awful. Is it at all compelling as an upgrade yet?
Rating: 2 Votes

When Apple can fix Command-B for BOLD STILL not working in the MAIL program, I'll know they are serious!

And then there's this. With 40GB of memory, an SSD, and 5TB of HD space, should Safari give me this message just running Facebook & MAIL? Clearly, we have here monkeys throwing paint at a wall thinking it's art. :(

This message appears on my screen dozens of times each day just running FACEBOOK! INSANE!

I also get spinning beachball freezes when dragging a link to the dock to launch another browswer. That never happened in Sierra either or El Capitan or previous!

The few new features are just not worth the added pain of breaking other apps. :(
The irony is that APFS makes my SSD slower! It boggles my mind. I do have my HD partitioned, but APFS cannot handle that?

Interestingly, I have an SSD and only 8 GB RAM and suffer from none of those issues.
Rating: 2 Votes

Same. I gave up on High Sierra and restored our machines to Sierra. High Sierras little instabilities and annoyances I could get around, but its inability to move files over a network, even without AFPS on any of them, without crashing or hanging, made it impossible to use. Our new fully decked out iMac never once successfully completed a shut down or restart without hanging after High Sierra. Sierra on the other hand runs perfectly fine, and I have yet to notice anything High Sierra did that I wish Sierra did.


You mention APFS, which may have had some problems, I'm not sure. But there was a significant bug with SMB that was only fixed in 10.13.3 that caused the finder to lock up when doing simple copying/moving of files (!!). That could mean millions of macs hooked up to windows networks! It sure affected me.

I agree that 10.13.3 is finally decently stable. But the fact that this basic functionality got borked and took months to fix is unacceptable. No wonder they recently announced that they will 'focus on stability'. Major releases should be moved to a 2 year cycle at least!
Rating: 2 Votes

That’d be a lot easier to answer if you could be more specific on the issues you encountered. Cause then, someone could confirm they had the same issue in 10.13.1, but doesn’t in 10.13.3.

I’ve been on HS since 10.13.0, and while some issues were annoying, none ever made me want to downgrade. And of the annoyances, most were gone by around 10.13.2.


Well, I’ll pick my favorite. Finder quicklook was utterly incapable of doing its job without a 3-5 second delay before opening a file, a problem that my 6 year old MBA never had, and which made HS completely broken for my workflow, which involves frequently needing to quicklook hundreds of PDFs.

Runner up would be the 10-20 second beachball navigating to folders with >100ish files. Again, I have to quickly move back and forth between scores of folders, each with hundreds of PDFs, so this was a fun problem.
Rating: 2 Votes