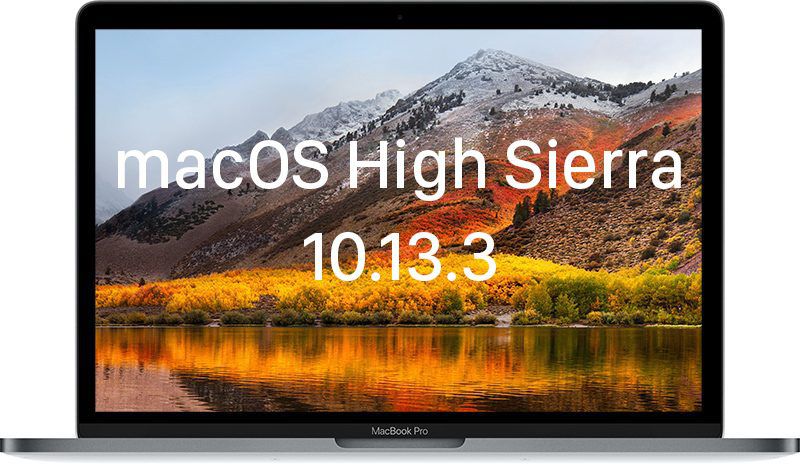 No major outward-facing changes were discovered in macOS High Sierra 10.13.3 during the beta testing period, but according to Apple's release notes, it brings security and feature improvements.

The update offers additional fixes for the Spectre and Meltdown vulnerabilities that were discovered and publicized in early January and initially fixed in macOS High Sierra 10.13.2.

We also know that the update fixes a bug that allowed the App Store menu in System Preferences to be unlocked with any password. Aside from those changes, Apple's release notes say that the update "addresses an issue that could cause Messages conversations to be temporarily listed out of order."

brunozs
Are they even going to release iMessages in iCloud at this point?
Rating: 10 Votes

Haha, the bar started out, raced to 3/4th done, then said 39 minutes left.


In the future, to update, open a Terminal, then:

sudo softwareupdate -i -a

And enter your password. When it's done, type "reboot". It's much faster than using the App Store app, and does the same thing.
Rating: 8 Votes

Have you tried submitting this bug to Apple's feedback site? https://www.apple.com/feedback/

The more people that submit bugs like this, the sooner Apple will pour time into fixing them.

Maybe when Steve Jobs was alive and kicking summiting bugs used to work, not anymore, the cat is gone and the mice ara having a party. Sierra renders PDF documents sharp and clear, High Sierra are blurry. Load a pdf document and see it for your self.
Rating: 3 Votes

TokMok3
As always they fix this and break something else... That is the motto.

Apple if you read this, please fix Preview to render PDF documents properly. I hope I'm not asking for something impossible...
Rating: 3 Votes

Are this downloads only for macOS High Sierra?


No. You can use the Gatekeeper one for any system from Mountain Lion onwards and the XProtect one from Mavericks onwards. So many systems use them, not just High Sierra.
Rating: 2 Votes

tywebb13
There is also a new xprotect and gatekeeper:

These often install automatically without any users interaction via the mac app store. However it is also quite common for them to fail to install. This results in many people having very old versions of these leaving their computers vulnerable. So it is good to get these installers to force them to install if necessary.

I find that the app Walls of Troy helps to ascertain if it is up-to-date. You can get it here if you want: https://itunes.apple.com/app/wallsoftroy/id443987849
Rating: 2 Votes

Air 11 - 2015 (SSD). Just thought it was funny that after the reboot, and at the Apple logo the installation bar bam went 3/4th done then put out an estimated time of 39 minutes. 10 mins later it says 11 mins remaining - bar still at 3/4th position.

That happens with my Macbook Pro 2011 15-inch sometimes.
Rating: 2 Votes

DaPizzaMan
It's about time.
Rating: 2 Votes