Earlier this week Apple announced the official HomePod launch date and revealed more details about the Siri-equipped smart speaker, including a built-in speakerphone feature and support for third-party music app streaming via peer-to-peer AirPlay, both of which anyone in the home can use. However, Apple has yet to adequately clarify the extent of its multi-user functionality with regards to Apple Music and other iCloud integrations, leaving many readers wondering if the HomePod is the right fit for their home. 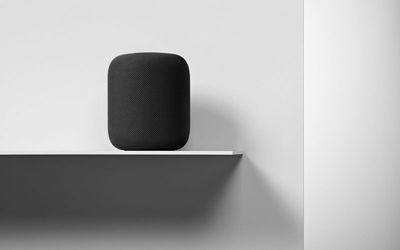 In possibly the first hands-on HomePod report since Apple's launch date announcement, Refinery29 on Wednesday shed further light on the device's multi-user capabilities. According to the article, many of Siri's personal assistant features can only be tied to the individual iCloud account used to set up the HomePod. These features can be manually disabled by the account holder, but they also appear to be automatically disabled when said account holder isn't home.

Although everyone in your apartment will be able to use the speaker, only the person who sets up HomePod on their iCloud account will be able to send texts, set up reminders, and get calendar notifications via voice commands.

Apple hasn't revealed how the HomePod detects when the owner of the iCloud account it is linked to is home, but the article suggests the speaker is able to keeps tabs on any iOS devices serving the same user account on the same local network. This function also appears to relate to how HomePod makes a (presumably single-user) Apple Music subscription accessible to other users at home when the owner is away, as revealed in documentation shared with Apple Store staff:

Everyone can enjoy music – After HomePod is set up, anyone in the home can enjoy music even when you're not there. HomePod streams Apple Music directly so your iPhone doesn't need to be nearby.

We already know that if no Apple Music subscription is linked to a HomePod during setup, users are still able to play content that's been purchased from iTunes along with Beats 1 radio content and podcasts, but it remains unclear to what extent this content is available to others when the user of the iCloud-linked account isn't home. Also still up in the air is how Apple Music's personally tailored curation service will fare under the pressures of multi-user HomePod access, as well as how Apple Music Family subscriptions will factor in.

Otherwise, the Refinery29 article comments on the HomePod's design and acoustic intelligence similar to what we've heard in previous hands-on reports, including its "crisper and clearer" audio quality when compared against speakers like the Google Home Max, the latest Amazon Echo, and Sonos One. However, it's worth noting Google Home and Amazon Echo can recognize different voices and serve personalized content to multiple users, something which the HomePod doesn't seem capable of at this stage.

At launch, HomePod will be available in the United States, UK, and Australia. In the U.S., it will be priced at $349, and it will cost £319 in the UK and $499 in Australia. Apple will begin accepting orders for the HomePod on Friday, January 26, with the device set to launch two weeks later on Friday, February 9.

69Mustang
Hot damn Apple. Stop being so vague! You're trying to sell a product and there are still just as many questions about it's operation as there are answers. The pre-orders start tomorrow. People shouldn't be speculating what the product does/doesn't do. That should be readily available info by now.

jakebrosy
"...only the person who sets up HomePod on their iCloud account will be able to send texts, set up reminders, and get calendar notifications via voice commands."

I don't understand tying a speaker to a specific person. Speakers are (nominally) relatively communal in nature. With this setup we would need 2 speakers to enjoy the supposed benefits of having a smart speaker in the home. Which makes the smart speaker seem pretty dumb.
Score: 19 Votes (Like | Disagree)

ChrisCW11
So, "everyone" can enjoy music, but nuts to anyone else for any other feature.

Funny how much Apple is Trumping up the idea it can be used by everyone when in reality it will only fully benefit one user in the house. It's Apple's usual tactic of spinning and downplaying a negative into a feature. I guess Apple wants you to buy many $400 HomePod's for each iCloud user to set up in their own room.

Why can't they just duplicate what both Google and Amazon devices do, let you pair multiple iCloud user accounts and then use "i-n-n-o-v-a-t-i-o-n" to identify different voices and link actions and skills to that user's account? Why can't two users in the same household ask an "assistance" product what their next appointment is without having to go into earshot of their own specific HomePod?!?!?!? Or what are people going to do, line up 2 or more of these in a row and hope they response properly to each "owner" without the other one hearing?

It's not rocket science, and it shouldn't be for a near 1 trillion dollar company, and yet Apple keeps dismissing the capabilities of their, supposedly, inferior competition while struggling to implement their own less capable version.

rpat701
Tell me why we need another voice assisted speaker again?
Score: 9 Votes (Like | Disagree)

GDF
So if you don't care about voice, then Homepod is not for you. There are plenty of Sonos speakers that offer much more and probably much better sound.

If sound quality doesn't matter to you, you don't. To me HomePod's voice features are barely relevant - sound quality is all I care about.