Apple CEO Tim Cook is spending some time in Canada this week, and yesterday he attended a hockey game and visited the Eaton Centre Apple Store in Toronto.

Cook today stopped by the offices of Canadian e-commerce platform Shopify, where he spoke to the Financial Post about augmented reality apps and the HomePod. 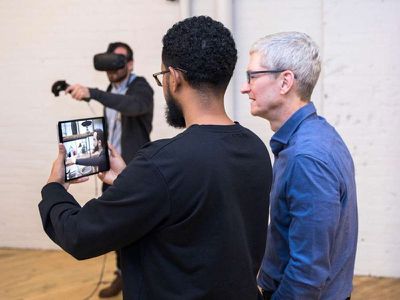 On the topic of the HomePod, Cook said that Apple's deep integration between hardware and software will help to differentiate the smart speaker from competing products like Amazon's Alexa and the Google Home.

"Competition makes all of us better and I welcome it," Cook said. "(But) if you are both trying to license something and compete with your licensees, this is a difficult model and it remains to be seen if it can be successful or not."

Cook also said a quality, "very immersive audio experience" was one thing missing from the smart speaker market, which Apple is aiming to fix. "Music deserves that kind of quality as opposed to some kind of squeaky sound," he said.

The HomePod, which, at $349 in the United States is more expensive than competing products, features a 7 tweeter array, an Apple-designed 4-inch upward-facing woofer, and spatial awareness, all of which is designed to provide the best possible sound.

During his interview with the Financial Post, Cook also spoke about augmented reality, a topic he's covered many times in the past. Cook said AR is "the most profound technology of the future" that's able to amplify human experience instead of substitute it.

Cook said developers across Canada are adopting AR at a "very fast rate" and that he "couldn't be happier" with developer interest in ARKit.

Cook's full interview, which includes additional comments on augmented reality and details on features coming to Shopify, can be read over at the Financial Post website.

eeboarder
Am I the only one that thinks it's crazy to put all these home microphone/camera devices in multiple rooms of your house?!
Score: 35 Votes (Like | Disagree)

Cyber86
I’m missing something here: how is Alexa / Prime Music not a “deep integration” between software and hardware with Alexa (and likewise with Google’s software and hardware)? I know Apple was revolutionary with phones / computers for developing both the hardware and the software, which resulted in this “deep integration”, but that ship has sailed for speakers with built in assistants and music services. Someone wake Apple up to this??
Score: 29 Votes (Like | Disagree)

Dragonmount
But Sonos does everything HomePod does...but better
Score: 28 Votes (Like | Disagree)

Naraxus
A device locked ONLY into the Apple ecosystem or ones that plays music from a variety of services? Hmm I think I know which one I'll be taking.
Score: 19 Votes (Like | Disagree)

But Sonos does everything HomePod does...but better

You base this on your extensive experience with HomePod?
Score: 17 Votes (Like | Disagree)
Read All Comments