Western Digital today announced the launch of two new products in its G-Technology G-SPEED Shuttle lineup, both of which are designed to be ultraportable RAID storage solutions aimed at meeting the needs of professional content creators who need both super fast transfer speeds and portability.

The new 4-bay G-Technology G-SPEED Shuttle with Thunderbolt 3 supports transfer speeds of up to 1000MB/s and can transfer an hour of 30 FPS 4K footage in minutes. It offers up to 48TB of storage space with removable 7200RPM enterprise class drives that can be set to RAID 0, 1, 5 and 10 configurations. 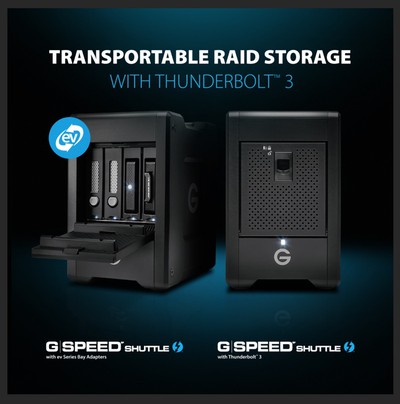 The G-Speed Shuttle with ev Series Bay Adapters offers the same Thunderbolt 3 support but adds integrated ev Series bay adapters to enable cross-functionality with ev Series drives and readers. It offers up to 24TB of storage and transfer rates of up to 500MB/s.

"The value of captured video content is immeasurable as it can't be easily reshot or recovered if lost. One of the biggest pain points facing film makers is not having the ability to move the massive amounts of footage quickly and reliably to the next stage of the workflow - both physically and virtually. If you're looking for a fast, high-capacity solution that's also easily transportable, your options are limited. With the power of Thunderbolt 3, the flexibility to integrate with our ev Series, and a design optimized for mobility, the G-SPEED Shuttle is the perfect solution for any on-the-go project team," said Scott Vouri, vice president strategy and business development, G-Technology, Western Digital.

Honest question. What is this massive HD space for? Video/photo editing?

Data rates for 4K (and beyond) production are staggering ('https://i2.wp.com/vashivisuals.com/wp-content/uploads/2014/06/VV4Kdatafinal.jpg'). Shooting ProRes 4444XQ in 4K generates 764GB per hour. With shooting ratios (footage shot to final film minutes) of 10:1 being conservative, a 2 hour feature shot with 2 cameras would be over 15TB. Smaller shoots (infomercials, corporate video, educational video, etc.) are now routinely shot in 4K (although usually at lower bitrates), for many good (and many stupid) reasons.
Score: 6 Votes (Like | Disagree)

bsbeamer
Can manufacturers who make RAID units with HDDs included PLEASE publish the read/write speeds in the multiple configurations? 1000MB/s means nothing to professionals who are storing 20+TB of media. They will generally NOT be setting up in RAID 0, which is where you're likely going to get 1000MB/s. Backup protection with RAID 5/10 on a unit like this will take a performance hit. Just be up front about how much of a hit that really is.
Score: 3 Votes (Like | Disagree)

JesperA
Great, but where is the Studio line with TB3?
Score: 2 Votes (Like | Disagree)
Read All Comments

Thursday January 21, 2021 1:38 am PST by Tim Hardwick
Apple's iPhone 13 series will feature a redesigned Face ID system that will allow for a smaller notch at the top of the screen, according to a new report today. The rumor comes via hit-and-miss Taiwanese industry publication DigiTimes, whose supply chain sources also claim that the ultra wide-angle lens in Apple's next-generation iPhones is due for an upgrade. The next-generation iPhones'...
Read Full Article • 75 comments