Writer/director Rian Johnson did an interview with The Wall Street Journal this week, discussing his favorite tech essentials that he uses both casually and professionally, including for the creation of Star Wars: The Last Jedi. In regards to the scripting process of The Last Jedi, Johnson said that he wrote the entire film on an air-gapped MacBook Air. 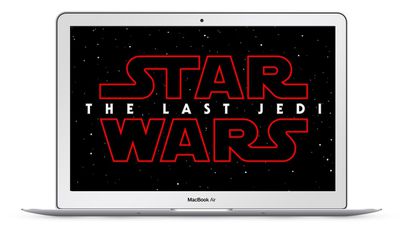 Star Wars: The Last Jedi official title via starwars.com
An air-gapped computer is never connected to the internet, ensuring that the device is completely isolated from other, potentially non-secure networks. Johnson explained that this prevented secrets within The Last Jedi's script from ever getting out, and he "used it for nothing except writing the script," although he didn't specify which model of Apple's MacBook Air he used.


I typed Episode VIII out on a MacBook Air. For security it was “air-gapped”—never connected to the internet. I carried it around and used it for nothing except writing the script. I kept it in a safe at Pinewood Studios. I think my producer was constantly horrified I would leave it in a coffee shop.

Johnson also mentioned playing iOS game Desert Golfing on his iPhone X, admitting he's played "more than 1,500 holes" in the game. Other tech discussed included a Leica M6 35mm film camera used on The Last Jedi, his Omega Speedmaster Pro wrist watch used to time out moments on the set, and "The History of Rome" podcast he listened to when writing the movie.

Ahead of the release of The Last Jedi, Apple hosted free Star Wars-themed workshops at select Apple retail stores. The sessions taught participants how to make movie trailers and code droids in celebration of Force Friday II, the day that new Star Wars toys launched for characters, stories, and locations from The Last Jedi. Earlier in the summer, animator and illustrator Wahyu Ichwandardi shared an Apple/Star Wars project of his own when he recreated the entire first trailer for The Last Jedi on a vintage Apple IIc from 1984.

rayzorboriqua
That movie was so terrible seeing his name upsets me.
Score: 41 Votes (Like | Disagree)

WiiDSmoker
Shame it wasn't leaked beforehand so I wouldn't have had to pay money to this turd.

That movie was so terrible seeing his name upsets me.

I thought it was great. Better than ROTJ (which is good) and all the prequels. That's just my opinion though.

I'm a Star Wars fan but not a rabid fan. I even like most of the special edition changes to the original trilogy. I grew up watching Star Wars on VHS for years before the special editions came out so I have a long history with the "pure" Star Wars experience. Even so, Lucas's changes were mostly positive. I understand why people get upset over the changes but I don't.

I'm not a movie critic so I won't go in-depth why I liked the movie but I thought it very enjoyable.
Score: 27 Votes (Like | Disagree)

Kabeyun
So the tech wizardry of “air gapping” is just not connecting to a network? Amazing. Lol. Maybe we could call watching a physical BluRay movie “hyperlocal streaming”.
Score: 20 Votes (Like | Disagree)

That movie was so terrible seeing his name upsets me.

Shame it wasn't leaked beforehand so I wouldn't have had to pay money to this turd.

Maybe if it had been leaked to would have been re-written and gotten better - just saying.
Score: 15 Votes (Like | Disagree)
Read All Comments