Hyper today announced the upcoming launch of a new HyperDrive USB-C Hub, which will be available for pre-order on Kickstarter starting on January 15.

The HyperDrive USB-C Hub, which is compatible with all USB-C equipped MacBook and MacBook Pro models, features a total of 8 ports, including a 4K HDMI port, a Gigabit Ethernet port, a microSD slot, an SD card slot, three USB-A 3.1 ports and one USB-C power delivery port. 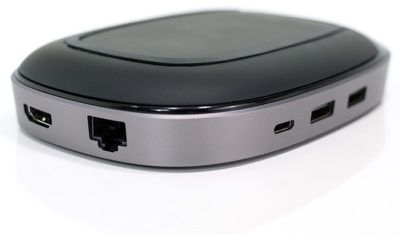 In addition, the USB-C Hub has a built-in 7.5W wireless charger and convertible stand that's designed to charge the iPhone X, iPhone 8, and iPhone 8 Plus.

Using the included stand, which has a hinge that can be set to multiple viewing angles, the iPhone can be charged flat or while standing up in landscape or portrait mode thanks to three included wireless charging coils.

HyperDrive claims that the USB-C Hub is able to charge an iPhone X faster than 7.5W wireless chargers available from Belkin and Mophie, and it says that the hub operates at a lower temperature than standard wireless charging accessories. The USB-C Hub is designed to operate at 77ºF, with generated heat isolated from the iPhone via an airgap and dissipated through the accessory's aluminum sides.

There is an LCD display built into the hub to provide details on voltage and current, and it's designed to be similar in size to other Qi wireless chargers on the market.

The Kickstarter project from Hyper has an estimated delivery of March 2018 for the first orders and April 2018 for later orders.

Yrmmont
It would be beneficial on this and future reviews to advise if the product meets UL (Underwriters Labs) approval or will be ISO listed.

I don’t want to purchase a product that could damage my laptop or a connected device!
Score: 2 Votes (Like | Disagree)

A lot of these products are not entirely aesthetically pleasing. It's somewhat how tech is. I care more about functionality.

Why is it so damn expensive?
.

Compared to what exactly? It's $69.00 through Kickstarter and there after $89.00.
Not entirely unreasonable.
Score: 2 Votes (Like | Disagree)

Hyper is owned by Sanho, not Sanyo.

A lot of these products are not entirely aesthetically pleasing. It's somewhat how tech is. I care more about functionality.

Compared to what exactly? It's $69.00 through Kickstarter and there after $89.00.
Not entirely unreasonable.