While deliveries of the first 8 and 10-core iMac Pro orders are set to begin as soon as next week, customers who opted for upgraded 14 or 18-core options were given shipping estimates ranging from 6 to 8 weeks for the machine when ordering.

It appears the 6 to 8 week estimate may not be quite accurate for all orders, as MacRumors reader Adam, who ordered a top-of-the-line machine with an 18-core processor, has received an updated delivery estimate of January 8 to January 9, which will be just a little over three weeks after the iMac Pro was first was ordered. 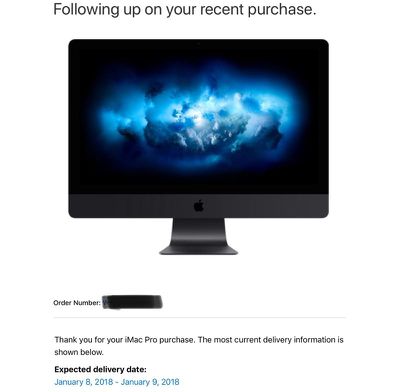 MacRumors forum member gobluejd has also received a sooner-than-expected shipping estimate for his 14-core iMac Pro, which will arrive on January 9 to 10 instead of the end of January.

It's likely that once initial orders go out, Apple will be able to improve those shipping estimates for new orders.

Customers who ordered 8 and 10-core machines will begin receiving their orders in the near future, as some iMac Pro orders started shipping just this morning in the United States and Canada.

The iMac Pro is still listed as unavailable in retail stores. Apple said the new machine would be available in stores by the middle of this week, a deadline that's been missed, but we could still see them in pop up in stores on Friday or Saturday.

Apple's iMac Pro is a workstation-class machine aimed at professional users who have demanding workflows. The iMac Pro supports up to an 18-core Xeon W processor, 128GB ECC RAM, an AMD Radeon Pro Vega 64 graphics card with 16GB of HBM2 memory, and up to 4TB of SSD storage.

Update: Some customers who received emails letting them know their orders will arrive early have received second emails informing them that the original emails were sent accidentally, so it is not clear if 14 and 18-core iMac Pro orders are indeed going to be arriving early.

SeattleMoose
And the reason to spend that much on an "iMac" is? Its barely upgradeable so to call it "pro" is pure marketing.
Score: 6 Votes (Like | Disagree)

WTH is wrong with you? Please don’t suggest anything. If you want throw away your money, then please send all to me - I am more than happy to spend it all.

Clearly you don't get the sarcasm... Jesus SMH
Score: 6 Votes (Like | Disagree)

Speak for yourself, dude.

I wouldn’t mind being able to easily upgrade RAM and SSD, but I can live without it. And RAM upgrades in dome limited fashion will apparently be possible.

Three to four years down the road, it’s time for a new machine anyway.

Upgrading the CPU hasn’t been realistic in a long, long time, as it almost invariably comes with the need for a new socket and/or chipset, i.e. you might as well get a new logic board. Oh, and your RAM is no longer the most efficient type. And further and further down the rabbit hole. Just get a new machine.

Anyone using a computer these days for computationally intensive work is probably replacing machines every few years as you suggest. And any serious “pro” is going to buy what they need when they buy a new machine, not buy the entry level model with an eye towards upgrading. My guess is most of the “pro” users on this forum complaining endlessly about upgradability aren’t really “pro” at all.

The one upgrade that does make sense to me is the GPU. If the trash can Mac Pro had been compatible with any number of standard cards, I don’t think anyone would have complained about upgradability.

I see expansion as the bigger issue. A lot of professional users, especially those in creative fields, need storage. Having a rat’s nest of cables and external drives is a turn off. I get that.

That said, there are still numerous professional users who don’t care about either expansion or upgradability. For them the iMac Pro is a fantastic option.
Score: 5 Votes (Like | Disagree)

imran5720
Although i don't need it at all, each time I read about imac pro i feel strong urge to order at least 18 core model
Score: 4 Votes (Like | Disagree)
Read All Comments