With the iMac Pro release dominating headlines on Thursday, we want to highlight that Apple also reiterated some other exciting news for pro customers: a modular Mac Pro is in the works. 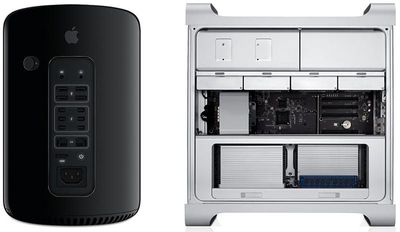 2013 Mac Pro on left vs. 2012 Mac Pro on right
The brief mention came at the very end of Apple's press release about the iMac Pro becoming available to order:

While this isn't new information, it does let us know that Apple remains committed to an all-new, powerful Mac Pro with an upgradeable design after first teasing the news to a group of reporters back in April.

We don't know what the new Mac Pro will look like, but given it will be a modular system, Apple could return to a tower design like the 2006 to 2012 Mac Pro with a case that could be opened with a lever on the back.

The promise that it will be a high-performance, high-throughput system suggests the modular Mac Pro could be even faster than the iMac Pro, which itself is easily the fastest Mac ever with workstation-class tech specs.

It's also good news for customers who were sad to see Apple discontinue its standalone Thunderbolt Display, which will be revived in the form of an all-new Apple-branded high-end display geared towards pro customers.

Apple's discontinued Thunderbolt Display
What we also don't know is when the new Mac Pro is coming. Apple only revealed that it wouldn't be ready this year. It could certainly be released at some point in 2018, or it could take a little bit longer—it's anyone's guess right now.

Apple hasn't updated the current Mac Pro in just shy of four years, beyond reshuffling some configurations and pricing back in April.

At the time, Apple's software engineering chief Craig Federighi admitted that the 2013 Mac Pro's so-called "trash can" design has a limited thermal capacity that doesn't always meet the needs of the most demanding workflows.

"I think we designed ourselves into a bit of a thermal corner, if you will," said Federighi, according to multiple reports.

It isn't often that Apple pre-announces new products in its pipeline, but there were growing concerns the company was no longer focused on professional users, evidently to the point that it felt the need to respond in a big way.

"We're committed to the Mac, we've got great talent on the Mac, both hardware and software, we've got great products planned for the future, and as far as our horizon line can see, the Mac is a core component of the things Apple delivers, including to our pro customers," said Apple's marketing chief Phil Schiller.

I'm pretty sure Apple could have taken the old Mac Pro aluminum chassis and thrown in a new, modern system board with a few m.2 pci-e connectors and the latest/greatest ports sticking out the back, a dual XEON CPU tray that takes the latest/greatest XEONS, and it would have been affordable and would have sold like hotcakes. Instead, we'll get some super-expensive, art museum like design that no one (except "Pros") can afford.

The aluminum design was introduced in 2003 and it still looks like it could have been designed yesterday.
Score: 69 Votes (Like | Disagree)

Stella
"At the time, Apple's software engineering chief Craig Federighi admitted that the 2013 Mac Pro's so-called "trash can" design has a limited thermal capacity ('https://www.macrumors.com/2017/04/04/apple-updates-mac-pro-and-more/') that doesn't always meet the needs of the most demanding workflows."

Apple thought "Pros" preferred Form over Function. How could Apple be so out of touch?
Score: 67 Votes (Like | Disagree)

BornAgainMac
When it was introduced the Mac Pro, they bragged how the thermal cooling worked.
Score: 48 Votes (Like | Disagree)

pete2106
Maybe they will remember that pro users care way more about scaleability and compatibility than they do about 'revolutionary' design features. The tower was always the best form factor for a pro machine.
Score: 47 Votes (Like | Disagree)

dmylrea
I'm pretty sure Apple could have taken the old Mac Pro aluminum chassis and thrown in a new, modern system board with a few m.2 pci-e connectors and the latest/greatest ports sticking out the back, a dual XEON CPU tray that takes the latest/greatest XEONS, and it would have been affordable and would have sold like hotcakes. Instead, we'll get some super-expensive, art museum like design that no one (except "Pros") can afford.
Score: 42 Votes (Like | Disagree)