Marques Brownlee and Jonathan Morrison have shared hands-on videos of the iMac Pro, which Apple said is available to order on December 14. 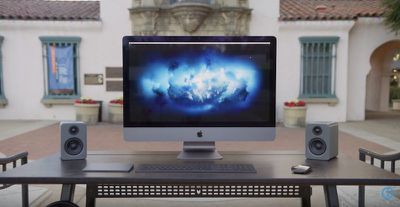 Image: Jonathan Morrison
Brownlee spent the past week with the iMac Pro, using it to create his hands-on video itself with Final Cut Pro X, and found it to be a super capable yet quiet machine with a beautiful display and a stealthy space gray enclosure.

He said the iMac Pro's biggest weakness is its lack of upgradeability, but he said its expensive $4,999 starting price is actually fair for the hardware included, and he priced out a PC with mostly equivalent tech specs at $5,100.

Of note, those benchmarks suggest the maxed-out, 18-core iMac Pro will be the fastest Mac ever by an almost unfathomable margin.

As a refresher, the iMac Pro can be configured with up to an 18-core Intel Xeon processor, up to 4TB of SSD storage, up to 128GB of ECC RAM, and an AMD Radeon Pro Vega 64 graphics processor with 16GB of HBM2 memory.

Brownlee also revealed that the iMac Pro comes with a black Lightning to USB-A cable in the box, compared to the standard white version for other devices. We've asked Apple if this black cable will be available to purchase separately.

Image: Marques Brownlee
He also showcased Twelve South's new HiRise Pro height adjustable stand that sits below an iMac or iMac Pro. The stand doubles as a space to hide the likes of external hard drives, cables, AirPods, or simply your wallet or keys.

HiRise Pro is available to order today for $149.99 on Twelve South's website in a color-matched Space Gray finish.

Morrison also had the 10-core iMac Pro, and he recorded a similar multi-core score of 37,434 on Geekbench. His video provides some nice outdoor shots of the machine, but it is more of a first look rather than an in-depth review.


iMac Pro will be available to order on December 14, starting at $4,999, in the United States, Canada, UK, and several other countries. Apple has yet to provide exact pricing details on a configuration-by-configuration basis.
Related Forum: iMac
[ 317 comments ]

He said the iMac Pro's biggest weakness is its lack of upgradeability, but he said its expensive $4,999 starting price is actually fair for the hardware included, and he priced out a PC with mostly equivalent tech specs at $5,100.

And here exactly is why this Mac is actually quite expensive. You can't upgrade RAM, SSD or graphic card later on without having to pay Apple for that.

AND.... what happens when Apple takes 5 years to release the new model for this Mac? OR when they suddenly decide that they'll stop making Final Cut Pro because it's no longer worth it and there is always iMovie?

Sorry for the rant. I'm just not liking how Apple is doing things lately.
Score: 36 Votes (Like | Disagree)

put together a similar speced computer with components and let us know what it comes out too.
Score: 20 Votes (Like | Disagree)

Its an iMac, what was he expecting?

It's an iMac Pro. They should make at least the most basic components user upgradable.
Score: 18 Votes (Like | Disagree)
Read All Comments