The new macOS High Sierra 10.13.2 beta can be downloaded from the Apple Developer Center or through the Software Update mechanism in the Mac App Store with the proper profile installed. 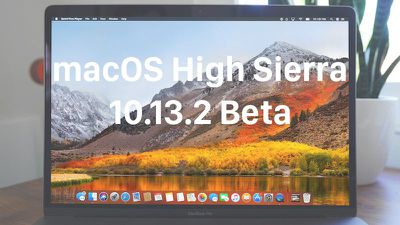 No significant new features were discovered in the first four betas of macOS High Sierra 10.13.2, but we'll update this post should notable changes be found in the fifth beta.

The previous update, 10.13.1, introduced fixes for some serious security flaws and brought new emoji to the macOS operating system.

NightFox
Sign of the times that a beta update to ATV makes the front page, but beta update to OSX only makes "More MacRumors Stories"
Score: 8 Votes (Like | Disagree)

Is the quick look bug one where when you quick look a JPG image, zooming in appears choppy and looks like it changes colour space mid way?

For me it uses the dGPU for some strange reason and prohibits external drivers to be ejected until I relaunch finder. Also if I use it too much it crashes finder.
Score: 1 Votes (Like | Disagree)

First let me say, I'm not an expert at computers by any means. I mostly use iOS for my work. However, High Sierra has been a mystery to me. We have four MacBooks in my home, two on Sierra and two on HS. Both of the MacBooks on HS, a 2015 rMBP and a 2016 12 inch MacBook, developed really bad wifi connection issues. I checked the firmware on my router and it was up to date. I finally took my 2015 rMBP to Apple yesterday for a genius appointment. I had video on my phone of the connection issues and the wifi diagnostics on the MacBook. Apple couldn't did a fresh instal back down to Sierra and magically the connection issues went away. I know HS is installed on tons of Macs with no issue but that wasn't the case with the two that I update.

Deleting /Library/Preferences/Systemconfiguration might have done the trick instead of a run to an Apple store and a clean install.
Next time you have issues try the above method, you do loose all network settings though, so make a backup of that folder before you delete that folder.
Score: 1 Votes (Like | Disagree)