Yesterday was Cyber Monday, an annual shopping event in the United States, United Kingdom, and many other countries that's part of the holiday shopping season and offers users notable discounts on a vast array of consumer products. Last night, Adobe released its online shopping data for this year's Cyber Monday, stating that November 27, 2017 is projected to set a new record and become the "largest online sales day in history" with a total of $6.59 billion spent by the day's end.

Compared to 2016, Cyber Monday 2017 saw a 16.8 percent year-over-year increase in sales, and it fared better in revenue compared to last week's big shopping days: Black Friday 2017 brought in $5.03 billion and Thanksgiving Day brought in $2.87 billion. Adobe's statistics leveraged Adobe Sensei and Adobe Analytics to analyze data from one trillion visits to over 4,500 retail sites and 55 million SKUs. Of all these data points, Apple and its products were found at the top of a few lists. 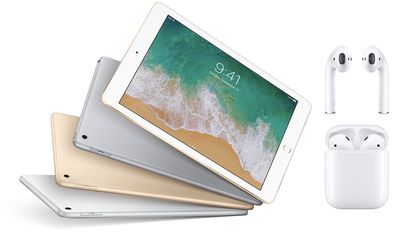 The AirPods were listed as overall top sellers yesterday, while iPads were included in the best-selling electronics category, alongside AirPods again, Google Chromecast, Samsung Tablets, Nintendo Switch, and more. In terms of discounts, Walmart was one of very few retailers with a brief sale on AirPods yesterday, marking the $159.00 earphones down by $15. Numerous retailers had sales on a variety of iPads, including the 9.7-inch iPad and 10.5-inch and 12.9-inch iPad Pro.

Shoppers on mobile helped set a new record with 47.4 percent of visits coming from mobile devices (39.9 percent on smartphones and 7.6 percent on tablets). Revenue earned from users shopping on mobile grew 39.2 percent year-over-year and reached a new all-time high of $1.59 billion. Of all mobile devices used to shop on Cyber Monday this year, iOS was in the lead with an average order value of $123, while Android was at $110.

“Shopping and buying on smartphones is becoming the new norm and can be attributed to continued optimizations in the retail experience on mobile devices and platforms,” said Mickey Mericle, vice president, Marketing and Customer Insights at Adobe.

“Consumers are also becoming more savvy and efficient online shoppers. People increasingly know where to find the best deals and what they want to purchase, which results in less price matching behavior typically done on desktops. Millennials were likely another reason for the dramatic growth in mobile, with 75 percent expecting to shop via their smartphone."

The biggest discounts were for TVs (21.1 percent off of the normal price on average), toys (18.8 percent), and computers (14.7 percent). In total, the 2017 holiday shopping season so far (marked as beginning on November 1) has seen a total of $50 billion in online revenue, jumping up 16.8 percent from 2016. According to Adobe, "this will be the first-ever holiday season to break $100 billion in online sales."

djcerla
They look ridiculous. Easy to lose. Fall off from ears. Overpriced. Nobody will buy them.

I love when people use "sheep" in their posts, because it lets me know who I can immediately ignore.

And weird, when I purchased the AirPods I thought I was buying a product I really liked at a price I deemed fair. I had no idea I was a mindless robot! By the way, I don't miss my headphone jack. At all.
Score: 17 Votes (Like | Disagree)

1. People buy things around Christmas. Obviously. And it doesn’t matter if it was already out before.
2. If you were accurate then there would be a proprietary audio situation rather than basic Bluetooth which allows for many third party options for wireless headphones. No one is forcing anyone to use AirPods.
3. People are still able to use wired headphones with the snug little FREE dongle that can be left attached to the end of the corded headphones easily.
4. Personally insulting and calling people names because they made different choices on how to spend THEIR MONEY is lame.
Score: 17 Votes (Like | Disagree)

Kaibelf
I'm surprised the iPad is far up the list this year, as all the buzz seems to be around the Switch and TVs. I'm thrilled for Nintendo as it's a great device.

They look ridicolous. Easy to lose. Fall off from ears. Overpriced. Nobody will buy them.

It's stupid. Just a big iPhone. Apple is doomed. This is a failure. It can't even make calls.

They look ridiculous. Easy to lose. Fall off from ears. Overpriced. Nobody will buy them.

I love the "they look ridiculous" posts. They look EXACTLY like the earphones that hundreds of millions of us already have, minus the wire. So if they had a wire coming out of the bottom, they would be perfectly fine?

Hilarious. People are so salty. Like them or not, the AirPods are the first wireless earphones that don't suck. And yes, Bluetooth earphones with a wire between each earphone is a different (but very similar) product category. The AirPods are a huge home run, and deservedly so. If they fit your ears, they are incredible.
Score: 15 Votes (Like | Disagree)

The headphone port is not coming back. No reason to keep living in the past. Just move on already.
Score: 12 Votes (Like | Disagree)
Read All Comments

Wednesday January 26, 2022 8:56 am PST by Joe Rossignol
Benchmark results have started to surface for MSI's new GE76 Raider, one of the first laptops to be powered by Intel's new 12th-generation Core i9 processor. Intel previously said that its new high-end Core i9 processor is faster than Apple's M1 Max chip in the 16-inch MacBook Pro and, as noted by Macworld, early Geekbench 5 results do appear to confirm this claim, but there are several...
Read Full Article • 285 comments