Best Buy has discounted all fifth-generation 9.7-inch iPad models with Wi-Fi + Cellular by $200 on a two-year contract with Verizon. 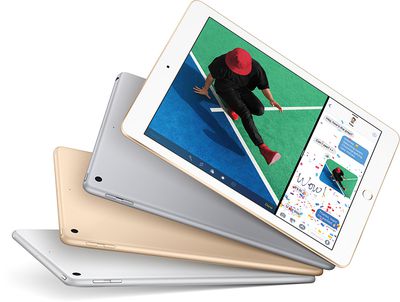 This limited time Black Friday deal drops the price of Apple's budget tablet to an all-time low of $259 for 32GB of storage or $359 for 128GB of storage, compared to regular prices of $459 and $559 respectively, in the United States.

The deal is available for select Gold and Space Gray models on Best Buy's website, with the deal for other models available at Best Buy stores only.

Apple's fifth-generation iPad is its latest 9.7-inch tablet, released in March 2017 as a lower cost alternative to the iPad Pro.

The tablet, simply named iPad, is similar in many ways to the iPad Air 2, but it has a faster A9 chip, a brighter Retina display, and it is slightly thicker and heavier. It also lacks a fully laminated display and anti-reflective coating.

For deals on other Apple products and accessories, including non-cellular iPad and iPad Pro models, make sure to check out our Best of Black Friday article and our Black Friday roundup, which continue to be updated throughout the day.

Disclaimer: MacRumors is an affiliate partner with Best Buy and may receive a small commission if you click one of the above links and make a purchase.

Would would buy an iPad right now?

boccabella
You must have very little respect for your readers’ intelligence to actually promote this so-called deal.
Score: 2 Votes (Like | Disagree)

Unless these deals are only for a limited time, one probably would better off seeing what the new crop of iPads will be like, and then making a better informed decision from there

Well, at least the bezel size should be reduced further. This years Pro was already a step, into the right direction. You also need to consider a tablet still needs some bezel to actually hold it in your hands without interacting with the display by accident. Speaking about the iPhone X design, I still struggle with that notch design like most people, but iPads should provide some more space to at least reduce it significantly.

I could see bezel-less tablets being a thing... when you're holding them, they put in "fake bezels" just for that. If you're mounting it, or putting it on a stand, then you can remove the bezels for full screen display.
Score: 1 Votes (Like | Disagree)

DaJoNel
No, only the Verizon model is available on two-year contract.
Score: 1 Votes (Like | Disagree)

Would would buy an iPad right now? Next years Models should follow iPhone X.

Perhaps others do not want to spend a lot because they are wise to use their hard earned cash on something important?
Score: 1 Votes (Like | Disagree)
Read All Comments