Apple today shared its latest report on diversity and inclusion, detailing its hiring practices over the course of the last year.


According to Apple, from July 2016 to July 2017, half of all new hires were from "historically underrepresented groups in tech," including women, black, Hispanic, Native American, Native Hawaiian, and Other Pacific Islander. 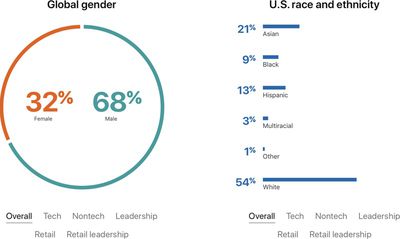 Female representation is "steadily increasing" and is up 5 percent since 2014. 36 percent of Apple employees under 30 are women, and 32 percent overall are women. Apple says that 29 percent of "leaders" at Apple are women, a one percent increase since July of 2016.

Apple says that "meaningful change takes time," but with 130,000 employees, even "small percentage point changes" have the potential to affect thousands of people. A two percent increase in female representation since 2014 equates to 37,000 female hires across the globe.

Further breakdowns of the diversity at Apple are available through Apple's updated Inclusion and Diversity website. Other topics on the site include education, programs for veterans, pay equity, accessibility, LGBTQ advocacy, and supplier programs.

Apple says it's proud of its current accomplishments, but there's "much more work to do." "As we strive to do better, Apple will remain open. As it always has been. And always will be," reads the diversity site.

826317
I think it's disgusting to even consider anything other than a candidates merit, when deciding on who to hire.
Score: 66 Votes (Like | Disagree)

If you get tens or even hundreds of applicants for the same position with roughly identical credentials, as is often the case in many STEM fields, then whom do you hire?

If there are really that many that are really that identical in terms of stats that matter, then pick one at random. I can tell you what you DON'T do: you DON'T say "well we need a few more brown (or white, or any other shade) ones." Which is exactly what's happening.
Score: 37 Votes (Like | Disagree)

itsmilo
Why are americans so obsessed with those statistics. I dont think i ever ran across a paper asking me „what i am“ here. Meanwhile first paper i had to sign in the US had a ethnicity question in it.

Devie
Oh let’s make a graph showing how we separate people and hire people based on their thing that makes them different.

Mac32
More liberal nonsense. "Oh, look at how inclusive we are." At the same time you're promoting Islam, in general the most oppressive and intolerant religion in the world, by pushing jihab-wearing woman as the new normal. Of course #notallmuslims, but in general the Muslim Arab world lacks tolerance of anyone but themselves (if that), and when you get a critical mass in a given area from mass immigration and high birth rates - enter sharia, FGM, widespread anti-semittism, attacks on freedom of speech, and all kinds of backwardness. I'm amazed that people can become so naive, that they actually buy into this stuff - as well as cultural appropriation, intersectionality etc.

This is Cultural Marxism - look it up.
Score: 18 Votes (Like | Disagree)

I think it's disgusting to even consider anything other than a candidates merit, when deciding on who to hire.

Isn't this the very definition of "racism"? Did you know that Afro-Americans can get into Harvard University with a 450 points lower SAT score than an Asian-American, and about 370 points lower than a White person. American Universities and corporations are actually discriminating against the most talented people and ethnic groups in the name of political correctness. The biggest looser is the ethnic group North-East Asians, which on average has a higher IQ than white people. I'm so friggin' tired of this "liberal" nonsense. This is why Donald Trump won, and probably will win again in 2020.
Score: 17 Votes (Like | Disagree)
Read All Comments