Developers and public beta testers who installed the iOS 11.2 beta on their devices earlier this week will be disappointed to learn that there's no iOS 11.2 beta for the iPhone X as of yet, and therefore no way to restore from an existing iOS 11.2 backup on a new iPhone X.

If you're running iOS 11.2 on your existing iPhone and create an iCloud backup, that backup is not going to be compatible with the iPhone X. 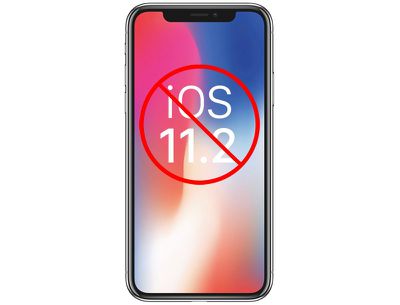 New iPhone X owners who want to restore from a backup will need to wait for Apple to release a version of iOS 11.2 for the iPhone X or downgrade back down to iOS 11.1.

It's not entirely clear when Apple plans to release a beta of iOS 11.2 for the iPhone X.

It could happen today now that the iPhone X is out in the wild and there are customers who can't restore, but Apple could also choose to wait until it's time for the second beta to be released, which means public beta testers and developers will be left over the weekend without a restore option.

The other alternative to restoring is to set a device up as new, but that requires re-downloading all apps and re-entering a lot of information, which is a time consuming process.

Update: Apple has released a new beta of iOS 11.2 for the iPhone X.

vdgroodt
Honestly, i was already planning for a fresh instal. Never hurts for the storage nor performance + it has never been so easy with pictures, music and all the rest being sincronised via iCloud..
Score: 4 Votes (Like | Disagree)

mitchfin
I just successfully downgraded to 11.1 from 11.2 by connecting to iTunes and manually selecting the 11.1 ISPW with option + click on check for updates, didn't lose any data. Now can reback up for my new iPhone. Took 2 minutes
Score: 4 Votes (Like | Disagree)

When restoring from an iOS 11.1 backup onto an iPhone X, it appears the iOS 11.1 update will be installed on the device automatically.

Not for me. Restored from an encrypted backup in iTunes (not iCloud) and I first had to set up the X as new, then update to 11.1, then I was able to restore.
Score: 4 Votes (Like | Disagree)

dumastudetto
Yes, I'm very surprised Apple didn't release an external iOS beta for a phone nobody had received yet.
Score: 4 Votes (Like | Disagree)

Return Zero
I must say I was surprised that the X had 11.0.x out of the box and not 11.1. However, they did make a nice change that allows for software updates as part of the setup/restoration process, so I didn't have to set up manually, then update, then wipe, then setup again. All in all this is becoming a much more seamless process with each year. Transferring the Apple Watch to the new phone was especially easy this time.
Score: 4 Votes (Like | Disagree)

dannyyankou
I would understand this if it was a developer beta only, but they released the public beta too. Major inconvenience.
Score: 3 Votes (Like | Disagree)
Read All Comments