Apple CEO Tim Cook sat down with NBC's Lester Holt on tonight's NBC Nightly News broadcast, where he spoke about Russian interference in the 2016 presidential election, the need for tax reform in the United States, and more.

As was shared in a clip of the interview earlier today, Cook commented on Russia's use of social media to interfere with the 2016 election and the congressional hearings executives from Facebook, Twitter, and Google have been attending to discuss the role Russia might have played. Cook said he believes the social networks in question have been learning "along the way a lot" and that fake news is a major issue. 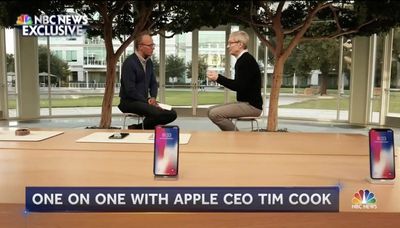 I think they learned along the way a lot. And you know, it's best to ask them if they should have projected it or not. I don't believe that the big issue are ads from foreign government. I believe that's like .1 percent of the issue.

The bigger issue is that some of these tools are used to divide people, to manipulate people, to get fake news to people in broad numbers, and so, to influence their thinking. And this, to me, is the No. 1 through 10 issue.

Cook also spoke on tax reform. Corporate tax rates, he says, "should have been fixed years ago." "Let's get it done now," he added.

I believe that tax reform is sorely needed in this country. We don't focus on the individual side, but for corporations, we think we have a pretty deep perspective on this. The biggest issue with corporations in this country is that if you earn money outside of the United States, which most companies increasingly will, the only way that you can bring it into the US and invest is if you pay 40 percent. And this is kind of a crazy thing to do. So what do people do? They don't bring it to the United States.

During the interview, which took place on Apple's campus, Cook showed Holt an iPhone X and explained Face ID features and security, topics Apple has covered multiple times in past executive interviews and through a detailed Face ID support document.

All Face ID data is stored on device, not on Apple's servers, Cook reiterated. "We don't have it intentionally because it's yours," he said. As he has done many times in the past, Cook also highlighted Apple's focus on privacy and said that if he had to re-do the legal controversy with the FBI over San Bernardino, he'd "make the same decision today."

On the topic of selling user data, Cook said that's not something Apple does.

It's something that we don't do because you are not our product. We take a very pro-privacy view. Apple doesn't know what the content of your messages are. We encrypt FaceTime end-to-end. We don't know what you're saying. And we think that's the way people would expect.

A final topic of discussion covered the evolution of the iPhone over the course of the last 10 years and whether it's reached where Steve Jobs had envisioned it would go.

"You know, we knew from the launch it was going to change the world. But frankly, it's gone far beyond what we would have dreamed," Cook said.

NBC Nightly News hasn't yet shared the full video of Cook's interview, but it should be available soon on the NBC website and will include his full commentary on a range of issues.

chriscrk
Tim Cook is great, and using their platform for good is really important. A company is made up of people and affects millions worldwide (in Apple's case), so I don't know why it surprises people that their CEO does more than just focus on products. It's important they stick up for their values and help improve things.

Tim Cook will be remembered for that! Very admirable man.
Score: 34 Votes (Like | Disagree)

calzon65
He should stop running his mouth about Russian Election Interference, Fake News, and Tax Reform. What he needs to do is get his butt back into his office and focus on issues that directly effect Apple customers like the software problems that were just uncovered from Security Researchers that used Wi-Fi and Safari Exploits to Breach iPhone 7 at the Annual Mobile Pwn2Own Contest.
Score: 24 Votes (Like | Disagree)

BaltimoreMediaBlog
It's important that he's using this platform to get what Apple wants, not necessarily what you want.

And also NBC via MSNBC is the biggest purveyor of FAKE NEWS out there, followed closely by CNN.
Some of their TV hosts actually think the President will be impeached like in just a month!
They say it on the air every day like there's a chance it will happen like tomorrow, but it won't anytime soon if EVER!
Score: 24 Votes (Like | Disagree)

He is right about the corporate tax rate. Hopefully the GOP doesn’t screw this up.

It's not the GOP you have to worry about.
The Dems are playing to their base by demonizing any corporate tax cuts.
Score: 22 Votes (Like | Disagree)

“All Face ID data is stored on device, not on Apple's servers, Cook reiterated.”

It amazes me Apple still has to keep repeating this. Or that people still think Apple is sending your fingerprints or face to their servers.

Well, when you learn about a little thing called Operation Northwoods, you question everything. Including where the government has their hands and who they control.
Score: 14 Votes (Like | Disagree)

JosephAW
Wow, not only is he a great CEO and good at creating dongle dependent devices but he's a political Russian expert.
Hey Mr. Cook, You better watch that Pwn2Own video and get your priorities straight. Thank you.
Score: 14 Votes (Like | Disagree)
Read All Comments