Apple CEO Tim Cook will appear in an interview with NBC's Lester Holt on this evening's NBC Nightly News broadcast, NBC unveiled in a tweet this afternoon. 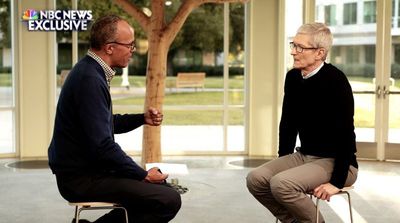 "I don't believe that the big issue are ads from foreign government. I believe that's like .1 percent of the issue," Cook told NBC Nightly News anchor Lester Holt in an exclusive interview airing Wednesday night.

"The bigger issue is that some of these tools are used to divide people, to manipulate people, to get fake news to people in broad numbers, and so, to influence their thinking," Cook said. "And this, to me, is the No. 1 through 10 issue."

Cook's commentary on Russia comes just after representatives from Facebook, Twitter, and Google testified before congress over what role Russian interference on social media networks may have played in the election. On Facebook alone, an estimated 126 million Americans viewed Russian-backed ad content during the campaign.

TONIGHT: Apple CEO Tim Cook sits down with @LesterHoltNBC to weigh in on Russian use of social media to meddle in the 2016 election. pic.twitter.com/UJLjZDUZbq — NBC Nightly News (@NBCNightlyNews) November 1, 2017

During the testimony, execs from the three social networks faced tough questions and were lambasted for not doing more to prevent Russia from taking advantage of social media to spread misinformation.

Another topic of conversation will include US tax reform, with Cook telling Holt that tax reform is sorely needed and "should have been fixed years ago."

convergent
Is this guy going to ever stop being a political hack and just run his company?
Score: 23 Votes (Like | Disagree)

I'm glad the media keeps doing stories about how the influence of Russia helped elect our idiot president to office. Though of course, said idiot president will of course call anything negative about him 'fake news'.

It's almost like Russia influenced the other idiot to skip campaigning in Wisconsin.
Score: 23 Votes (Like | Disagree)

obeygiant
They should have more comfortable chairs to sit in during the interview.
Score: 23 Votes (Like | Disagree)

Apple is clearly worried about how the iPhone X sales may play out.

Its sold out for 5-6 weeks, I doubt they are worried..
Score: 13 Votes (Like | Disagree)
Read All Comments