Now that the media has had hands-on time with the iPhone X, the new smartphone is being put through its paces in a few areas, including Face ID. Since the iPhone X's new biometric security system has already been at the forefront of much debate and skepticism, most review and hands-on coverage has tried to fool Face ID, including Mashable and Business Insider running a "twin test" to see if one iPhone X unlocks for identical twins. 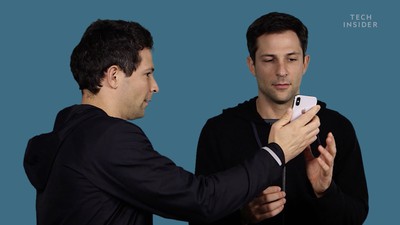 Image via Business Insider
Mashable ran its test by asking two different sets of identical twins to try to unlock the iPhone X, first by having one twin register their face in Face ID and confirm it unlocks for them. Then, the second twin held up the iPhone X to their face -- not registered in the device -- to see if they could get into their sibling's iPhone. In both instances of Mashable's twin test, the iPhone X successfully unlocked using the face of the non-registered twin, fooling Face ID completely.


With both sets of twins, the other twin unlocked the iPhone X, even though neither one had registered his face with Face ID on the iPhone X. With the Franklin twins, we had both brothers remove their glasses and had the other brother register. Again, Face ID failed to tell the difference.

Look, Apple never claimed Face ID was perfect and, in my tests, it could not be fooled by photos or videos of my registered face. Still, these results do not bode well for all the identical twins out there, to say nothing of triplets and quintuplets.

Interestingly, Business Insider's results contrasted directly with Mashable. In its test, Business Insider first had one twin register his face and then simply try to fool Face ID by wearing a hat, glasses, and a scarf, and Apple's security system unlocked every time. Then, his identical twin brother raised the iPhone X in front of his face, but the device repeatedly failed to open and was apparently able to distinguish between the two brothers.

I was pretty shocked that the iPhone X could really pick apart the details between me and my brother considering some of our own family members can’t tell us apart. So, yeah, it was a pleasant surprise knowing that Brian can't break into my iPhone X and I can’t break into my brother's.

It's worth noting that Apple itself admitted that Face ID may not be able to distinguish between identical twins during the iPhone X unveiling on September 12. Phil Schiller said at the time: "The chance that a random person in the population could look at your iPhone X and unlock it with their face is about one in one million. Of course, the statistics are lowered if that person shares a close genetic relationship with you. So, for example, if you happen to have an evil twin, you really need to protect your sensitive data with a passcode."

Face ID also runs using the smartphone's A11 Bionic chip with a built-in neural engine and Apple has said that it will get smarter over time, so in the future more sets of twins might discover that Face ID more accurately tells them apart from their siblings.

H.E. Pennypacker
I can’t even tell the difference between my wife’s identical and her. Who even knows, I might have slept with them both.
Score: 46 Votes (Like | Disagree)

Look, Apple never claimed Face ID was perfect and, in my tests, it could not be fooled by photos or videos of my registered face. Still, these results do not bode well for all the identical twins out there, to say nothing of triplets and quintuplets.

They specifically said in the keynote that FaceID could be unlocked by your evil twin, so this really shouldn't be a surprise to anyone.
Score: 19 Votes (Like | Disagree)

OldSchoolMacGuy
Good thing most of us don't have a twin.
Score: 15 Votes (Like | Disagree)

MacFinnley
WHO the **** cares? Your twin is your brother/sister, not a stranger.
Score: 12 Votes (Like | Disagree)

The Scramble to make excuses begins ;)

What excuses, Apple specifically said during the keynote that FaceID isn't for you if you have a twin. They specifically mentioned it.

What's next, a TouchID test with someone who has no fingers?
Score: 8 Votes (Like | Disagree)
Read All Comments

Friday July 10, 2020 11:12 am PDT by Juli Clover
Apple this month published a support document that warns customers against closing their Mac notebooks with a cover over the camera as it can lead to display damage. Image via Reddit Apple says that the clearance between the display and the keyboard is designed to very tight tolerances, which can be problematic. Covering the camera can also cause issues with automatic brightness and True Tone....
Read Full Article • 323 comments

Friday July 10, 2020 2:58 am PDT by Tim Hardwick
At last month's WWDC, Apple officially announced that its Mac computers will be transitioned from Intel x86 to homegrown Apple Silicon chips. Apple said it plans to deliver the first Apple Silicon Mac by the end of the year and complete the transition in about two years. According to Apple analyst Ming-Chi Kuo, a 13.3-inch MacBook Pro with a form factor similar to the current 13.3-inch...
Read Full Article • 177 comments

Wednesday July 8, 2020 9:35 am PDT by Joe Rossignol
Despite multiple reports indicating that Apple will not include EarPods or a wall charger with iPhone 12 models this year, one analyst believes that pricing will still increase slightly compared to the iPhone 11 lineup. In a research note provided to MacRumors, analyst Jeff Pu forecasted that iPhone 12 pricing will start at $749 for a new 5.4-inch model, an increase of $50 over the base...
Read Full Article • 288 comments