Amazon today announced an all-new version of its Kindle iOS app, which has been redesigned to provide streamlined access to some of Kindle's most popular features. The company said this will let users more easily move between pages of a book, access their library and the bookstore, and more. Amazon has also built Goodreads into the iOS app for the first time, similar to the implementation its e-readers have seen over the years.

Details of the new design include larger book covers, new fonts, a new app icon, and a new light background theme to go with the existing dark option. The new bottom bar navigation allows one-tap access to the book you're currently reading, as well as tabs for Home, Library, Store, and more options. There's also now a search bar available throughout the app, allowing for instant searches of your library or the Kindle Store. 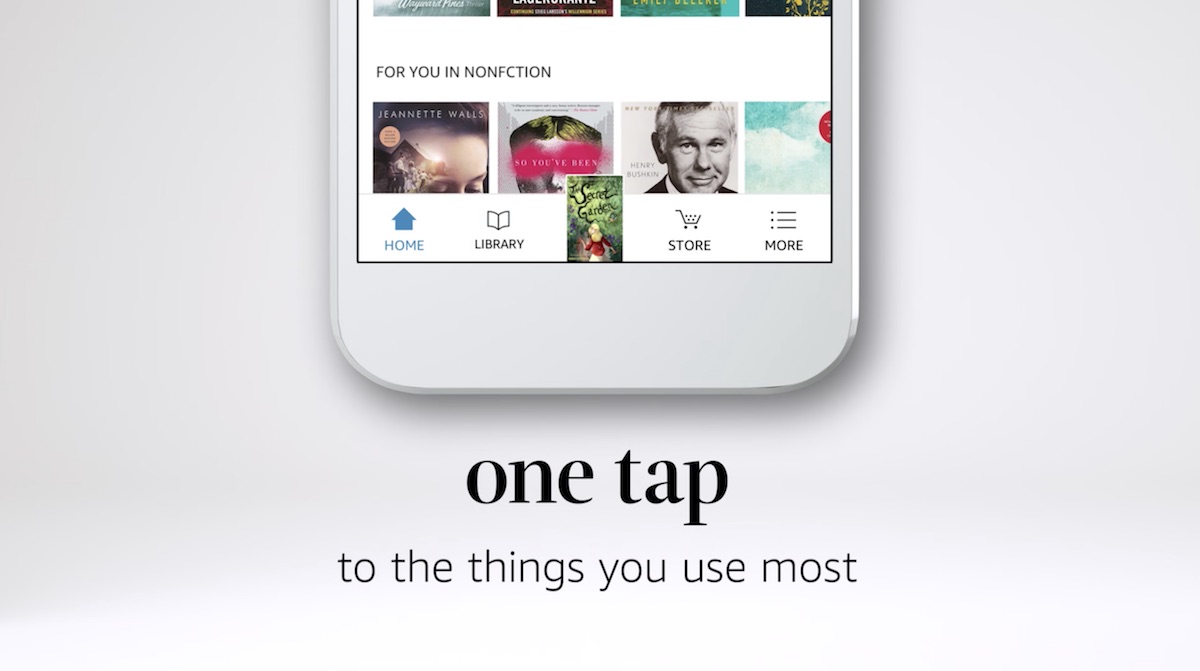 “We’ve built the new Kindle app from the ground up for book lovers, giving readers easy access to everything they might want to do with their books, all in one place,” said Chuck Moore, Vice President, Kindle. “It’s now easier than ever to turn your phone or tablet into a book and immerse yourself in an author’s world at any time.”

iOS users will also be able to sign into their Goodreads accounts to discuss books and get recommendations from fellow readers, thanks to integration with the social network built directly into the app. Amazon owns Goodreads, and has added functionality for the reader-based social network into a few of its Kindle devices since it purchased the company in 2013.


Goodreads features in Kindle for iOS include a Community tab to stay up-to-date with what friends are reading, as well as suggestions for people to follow who have similar tastes in books. You can post notes and highlights from the book you're currently reading so friends can comment, share when you start and finish a book, rate books, and more abilities taken from Goodreads' social network features. 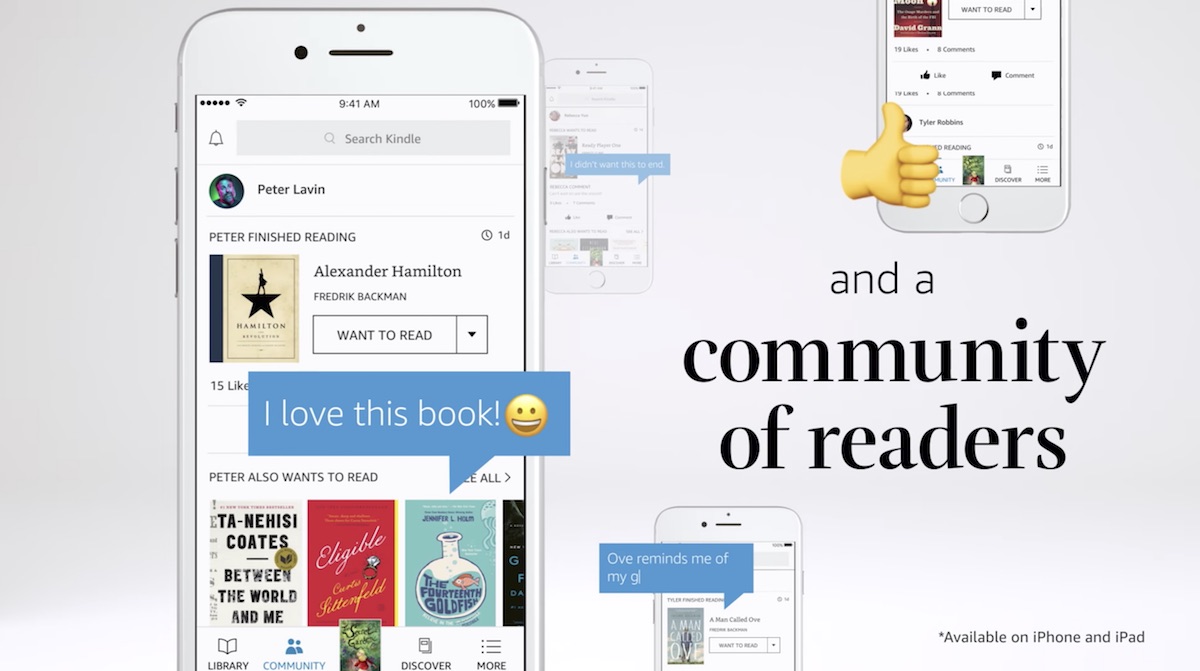 Goodreads will be available in the Kindle app only on iOS for users in the United States, and will expand to Kindle for Android in a future update. The Kindle app is available to download for free from the iOS App Store [Direct Link], and the new update is rolling out in the App Store beginning today.


The Kindle is exactly what this article isn't talking about, but since you asked: I also have an iOS device with the Kindle app, but I still own a Kindle e-reader. The reason is simple, and it's the screen. You can complain about the lack of colors (though very expensive screens do exist like this now, I've read), but the e-ink screen makes for a far more paper-like reading experience than an LCD. An LCD is backlit (with LEDs in the case of iOS devices), where as e-ink relies on ambient light (or an on-screen light on high-end Kindles) to illuminate the screen. This makes it great for reading outside, but many people also find it less straining to read inside. It also lets the battery last days or weeks.

If you're happy with the app, that's fine; people who read a lot often prefer the separate device for the above reasons. It's one of the reasons I wouldn't buy a Fire tablet for the primary purpose of reading--and perhaps why Amazon dropped "Kindle" from the name of this product line.
Rating: 4 Votes

rhett7660
I love my Kindle. Like others have mentioned it isn't the be all end all. For my graphic novels and comic books I like the real thing. But for my casual reading, I almost exclusively use my Kindle. I do some of my study work on the Kindle also, but for researching and finding content within a book fast, aside from a specific word, having the physical book to skim through is a lot faster.

Hands down for me though, reading books, the Kindle is my go to device. I do like the fact I can also read on my iPhone, iPad, or Computer both Mac and Windows and have it sync across all my devices. That is nice.
Rating: 3 Votes

True to a point. Reading on an iPad, more eye strain, outside reading, Kindle lighter weight, reading fonts, just an overall enhanced reading experience on the Kindle. Especially for those readers who are more then casual readers. I use both, prefer the Kindle.

Plus, for reading outdoors, nothing beats a Kindle. It's perfect on the beach! It's also my preferred device for travel. I read studio books with color photos on my iPad but for other books, reading on the Kindle is much easier on my eyes. Plus the battery lasts a long time.

For nonfiction books, I especially value the ability to make highlights and to have those archived and retrievable online. That's much faster than the old "underline and then type out method" that used to take me hours.

As for literature, or longreads, the digital experience is soulless. Paper and ink are more sensory. It’s comparable to looking at an image of coffee versus sipping the real thing.


Speak for yourself. I get plenty of soulful/sensory experience with digital books, plus they fit better with my nomadic and small-space lifestyle than dead tree books.
Rating: 2 Votes

I have an iPhone, an iPad, and a Kindle Paperwhite. I read newspapers and magazines on any of the three, but books are never read on an iDevice.

I am a huge reader. I spend more time reading books than any other leisure activity. The only books I read are physical books and books on my Kindle. Reading on the kindle is as close to reading a physical book as possible. No backlight (which I find wearying when reading, rather than interacting with words, like I do on my iPhone & iPad), I can easily read it in bright sunlight or a very dark room, both without strain. I don’t use apps, I don’t bother with color (I read the occasional graphic novel on my iPad).

I know some people are fine reading on the iPad, even prefer it, I can’t do it. It’s too much like faffing about, not actual reading.
Rating: 2 Votes

True to a point. Reading on an iPad, more eye strain, outside reading, Kindle lighter weight, reading fonts, just an overall enhanced reading experience on the Kindle. Especially for those readers who are more then casual readers. I use both, prefer the Kindle.
Rating: 2 Votes

It’s puzzling that digital books aren’t much cheaper than their printed counterparts. .


The biggest cost of most books is the content and that is the same in a digital version. And of course you can get out of copyright ebooks for nothing, which are 100% cheaper than their physical counter parts.
Rating: 1 Votes

The number of books was an original reason I started buying ebooks. I have 6 bookshelves full of books. Besides which my wife and me have an additional 30 boxes we’ve moved from place to place, at least at the last count. My current solution is, after reading, to sort the books. I tend to re-read books that I really like. Those go on the bookshelf. Books I’ve read, but don’t have an interest in re-reading go to a used book store, where I get some money back. Which leads back to one of my points. Ebooks that I’ve bought and never re-read sit in my cloud library, useless.


Yes, it's also important to consider why you're buying them. For example, most of my books are used for reference, and aside from hauling them around, it's quicker to search then digitally. If you like shelves of books in your study, or the smell of paper, or keep classics as an 'investment' of sorts, etc. it can be quite different. For me, it comes down to practicality and I'm (currently) less concerned about how to lend them or hand them down, etc.

Or, maybe for the person that just plows through fiction or romance novel after another, it might be argued that you are saving paper/resources and have almost zero value for them after you've read them once. So, it's going to vary for each person.

The real dilemma is when you start considering more expensive books (i.e.: $100 plus). It's really hard to 'rent' one of those, even if ultimately more practical.
Rating: 1 Votes

RedTomato
I got a Kindle paperwhite a long time ago, and ended up never using it. Something about the blue white glare of the screen and the graininess of the screen texture rubbed me up the wrong way. Also the flashing between pages bugged me. I could never get it set up just right - the brightness always seemed wrong, the font the wrong size etc.

I ended up doing a hell of a lot of reading on my iPhone 5S - the Retina screen seemed a lot better for me (and short sighted me could read it very easily without my glasses). Then I realised I wasn't really absorbing a lot of what I was reading. I'm now moving back to paper books - I was shocked to find I'd lost the ability to read longform on a book. It's been a long slow journey back to reading actual physical books, but I find they exercise my mind better, and I engage with the book more when it's on paper.

Another benefit is when I was reading late at night on the phone in bed, often I'd move on to scanning various websites and end up not getting to sleep until 2am. Now I've banned my phone from my bedroom - it charges in the living room each night, not next to my bed. With paper books, when I get too tired to hold it up, I just put it down and go to sleep - there's nothing else to distract me from sleeping or keep my mind buzzing till 2 am.
Rating: 1 Votes
[ Read All Comments ]