Billboard has announced that its Hot 100 and Billboard 200 charts -- which measure singles and albums, respectively -- will begin weighing plays made on paid subscription streaming services/tiers more than plays made on pure ad-supported services/tiers in 2018. This means services that only support paid subscriptions, like Apple Music, will receive a "greater emphasis" in Billboard chart calculations.

The Billboard calculations will include plays made on paid subscription tiers of hybrid services as well, related to Spotify and SoundCloud. For the Hot 100 list, Billboard said that there will now be "multiple weighted tiers" of streaming plays, with paid subscription at the top, then ad-supported streams, and programmed streams. Besides streaming, radio airplay and digital song sales are also still accounted for. 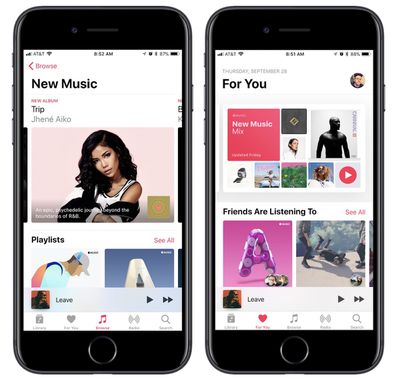 Currently, the Billboard Hot 100 chart weighs streaming music from services like Apple Music, Spotify, YouTube, and Amazon Music under one "on-demand" category, as well as having a "programmed" type for Pandora and other online radio services. In this setup, on-demand has a greater weight, but plays made through paid subscriptions aren't specifically given more weight over free tiers.

Billboard explained that this shift to a "multi-level streaming approach" reflects how much music listening has changed over the years, particularly with how popular exclusive songs and albums have become for streaming services, which lock this content behind paid subscriptions. These changes not only affect the Hot 100, but also the Billboard 200 and "many other charts," with the media company stating: "It is our goal at Billboard to accurately portray in an unbiased manner how music performs relative to other music."

The shift to a multi-level streaming approach to Billboard’s chart methodology is a reflection of how music is now being consumed on streaming services, migrating from a pure on-demand experience to a more diverse selection of listening preferences (including playlists and radio), and the various options in which a consumer can access music based on their subscription commitment.

The Billboard 200 chart, which tracks albums, only began to count streaming numbers back in 2014, one year prior to Apple Music's debut. Once the service launched, Apple Music plays were counted towards Billboard's Hot 100 and Billboard 200 charts beginning in August 2015. Other streaming providers that contribute to the charts include Spotify, Amazon Prime, Google Play, Medianet, Rdio, Rhapsody, Slacker, Tidal, and Groove Music Pass.

maramok
Hey look a company adjusting to the realities of the world around them. I'm looking at you blockbuster...
Score: 6 Votes (Like | Disagree)

The Barron
Wow! Simply unreal. This has made my week. :D
Score: 3 Votes (Like | Disagree)

Hey look a company adjusting to the realities of the world around them. I'm looking at you blockbuster...

Or you, HMV! I remember reading about how their MD, Steve Knott, proved himself to be utterly incompetent and very poor value for money:

Not long after HMV's 2002 stock market listing, Beechwood (the agency I founded and ran with my business partner, John Wood) was asked to re-pitch for the business as a new marketing director and managing director had come in to the company and they felt other agencies should cast fresh eyes on the business. As I had worked on the account for so long and felt it was in my blood, I really wanted to give it my all, so we pulled out all the stops in this five-way pitch.

The day of the presentation came and we stood in the boardroom in front of the new MD, Steve Knott, and his directors. For some time we had felt the tides of change coming for HMV and here was our perfect opportunity to unambiguously say what we felt. The relevant chart went up and I said: "The three greatest threats to HMV are, online retailers, downloadable music and supermarkets discounting loss leader product."

Suddenly I realised the MD had stopped the meeting and was visibly angry. "I have never heard such rubbish", he said, "I accept that supermarkets are a thorn in our side but not for the serious music, games or film buyer and as for the other two, I don't ever see them being a real threat, downloadable music is just a fad and people will always want the atmosphere and experience of a music store rather than online shopping."

Genius. Anyone who had used Winamp, Napster or MP3 players like the Creative Nomad Jukebox could easily see the sort of direction it would head in. Even I could and I am most definitely not MD/CEO material.

Worth a read, a good lesson of arrogance and misjudgement:
Ref: https://www.theguardian.com/commentisfree/2013/jan/15/why-did-hmv-fail
Score: 3 Votes (Like | Disagree)

BigBeast
It sounds like those that pay for music have more of a voice than those that don't?

What about artists that decide to release their music outside of these outlets (i.e. mixtapes)? Will they be able to make it to the top of the Billboards without having to open their distribution to Apple Music and their ilk? Just because a song is popular, doesn't mean it started on a major label or had any sort of marketing.

This seems like another way to keep the "pay to play" scheme alive. If you want make your living as a recording artist, you're going to have to play along by the rules, and everyone gets their cut. :rolleyes:
Score: 1 Votes (Like | Disagree)

It sounds like those that pay for music have more of a voice than those that don't?

In the old days charts were based on record sales, not radio requests. It's about who puts their money down for something.
Score: 1 Votes (Like | Disagree)

Interesting, this will certainly give Apple more "power" in the music industry. I wonder if that is a good thing :rolleyes:

How will it give them more power? Billboard is simply adjusting their analytics to properly account for exclusives on paid services and general changes in the market.
Score: 1 Votes (Like | Disagree)
Read All Comments