Apple has kicked off a worldwide advertising campaign for its new streaming music service, with advertisements showing up in various cities like San Francisco, Tokyo, Toronto, Los Angeles, and Mexico City. 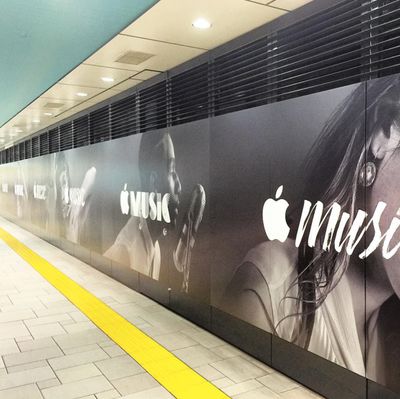 Apple Music banners in Omotesando via Instagram
The banners mimic images that have been used to advertise Apple Music on Apple's website, featuring desaturated pictures of artists overlaid with the Apple Music logo in a variety of different fonts.

Apple Music banner featuring FKA twigs via Instagram
It is not clear when Apple began its Apple Music advertising push, but the banners and signage appear to have gone up over the last few days. This is the first major advertising campaign for Apple Music since its June 30 launch and the first public ads, aside from videos that debuted at WWDC when the service was introduced.

As Apple begins heavily advertising Apple Music around the world, Billboard has announced that songs streamed from Apple Music will now count towards the Billboard 200 and the Billboard Hot 100. Apple was recently added as a streaming provider and Apple Music songs will influence the August charts.

As to this ad campaign: I hope it fails, as the service is not fit for purpose.

Fits my purpose very well. Thank you very much.
Score: 19 Votes (Like | Disagree)

kingtj
This ad campaign looks nice and all, but personally, I wish Apple would refrain from advertising this stuff until it gets the product working more smoothly.

Right now, everyone I know trying out Apple Music says the same things about it. On the plus side, they like the large music selection available. But they all have issues with slow syncing of data among multiple devices on a given iCloud account and there are too many rough edges. (EG. Often, I tap on a song to listen to it streaming and I see an icon with a little EQ with moving bars, indicating the music is playing - but i hear nothing. I've found I have to wait a good 10 or 15 seconds, sometimes, before it actually starts playing. But before I realized the animated EQ bars had no relation to what was actually happening, I kept cancelling and re-trying songs, thinking something went wrong.)
Score: 12 Votes (Like | Disagree)

Except that it's not, in fact broken. I use the service every day. Every day. I have had so few issues with it. I do, however notice that many of you who are trashing it seem to be very new to MacRumors. Hmmm...

You make the rest of us Apple enthusiasts look like dopes by association. Apple Music is flawed beyond belief. Match is completely broken. You can't create new playlists with ease by simply choosing a song that's playing. They can't even get the simple stuff right.
Score: 7 Votes (Like | Disagree)

RealKrS
The only thing I liked about Apple Music was the fact that I was able to cancel the "Auto Renew" of my subscription before the trial period ends late September. That way I don't have to remind myself to cancel it.
Score: 7 Votes (Like | Disagree)
Read All Comments