Apple Maps has added public transit directions for Ireland, as pointed out by developer Steven Troughton-Smith on Twitter. With the updated directions, users in Ireland can now choose from a few different public transportation routes when traveling around Ireland. 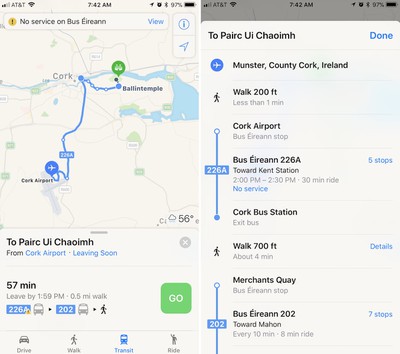 Apple has been adding public transit directions to new cities around the world since the feature first debuted in iOS 9 in 2015. Some of the latest areas to get the feature include Taiwan, Ottawa, Edmonton, Québec City, and Hungary.

You mean like... the USA? Last I checked it too is in the northern hemisphere.

The UK and Ireland meanwhile get hit by hurricane force winds basically every year. It's only in the last couple of years that they've started naming them, because they realized it was a good way to get people to sit up and pay attention to the fact that there's a big storm coming through.

Usually storms that hit the UK are only category 1, 2 at most though.

Ireland is way more north in the hemisphere than the US. It is closer to Greenland than we are. I did say in My original post “so far in the northern hemisphere” which I assume would say it is more north than the US. Sorry, should have specified more.
Score: 2 Votes (Like | Disagree)

Excuse my ignorance, but I never knew countries so far in the northern hemisphere could get hurricanes??? Aren’t the ocean temperatures there too cool for that?

You mean like... the USA? Last I checked it too is in the northern hemisphere.

The UK and Ireland meanwhile get hit by hurricane force winds basically every year. It's only in the last couple of years that they've started naming them, because they realized it was a good way to get people to sit up and pay attention to the fact that there's a big storm coming through.

Usually storms that hit the UK are only category 1, 2 at most though.
Score: 1 Votes (Like | Disagree)
Read All Comments

Sunday May 31, 2020 8:04 pm PDT by MacRumors Staff
Amid unrest in numerous U.S. cities following last week's killing of George Floyd by police in Minneapolis, Apple CEO Tim Cook has shared an internal memo with employees (via Bloomberg) addressing the pain that many are feeling and urging others to commit "to creating a better, more just world for everyone." Cook also announced that Apple is making donations to several groups challenging...
Read Full Article • 113 comments