Apple Maps has been updated with transit data in Hungary, enabling iPhone users to navigate with public transportation directions in Budapest, Debrecen, Szeged, Miskolc, Győr, Pécs, and other regions of the country. 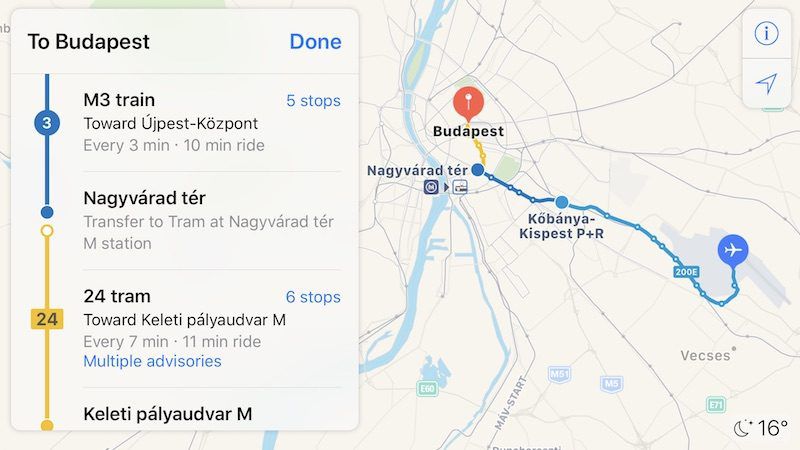 In the Budapest metropolitan area, supported vehicles include the Budapest Metro, BKV buses and trams, and BHÉV trains.

MÁV-START trains are also supported throughout Hungary for long-distance routes, such as between Budapest and Debrecen.

For a regularly updated list of cities with Apple Maps transit, visit the iOS Feature Availability page on Apple's website.

farewelwilliams
so you can be lost and hungry
Score: 4 Votes (Like | Disagree)

so you can be lost and hungry

Google Maps has had Street View for over a decade now.

When will Apple “catch up” with Google?
Score: 1 Votes (Like | Disagree)

autrefois
Initial reaction: they still don't have Apple Map transit directions in my city in the US?

Second reaction: it's good at least that for once that everyone in the US gets a new feature before most of the rest of the world. It's good that Apple is doing this feature and I hope it spreads quickly.
Score: 1 Votes (Like | Disagree)

Till now, no direction or transit is available in India. Apple need to be fast. They are so slow.

Well, there seems to be no evidence that Apple is working on India right now. I wonder though, how difficult would it be to get reliable timetabling data and routes for transit in India? The main reason the whole of the Netherlands is covered tight now and not only Amsterdam, is because there is a singel corporation that provides the data for all transit in the Netherlands. Maybe that the Indian Railways is doable, but if every little company needs to provide their own timetable manually, it would be a nightmare trying to implementing that.
Score: 1 Votes (Like | Disagree)

Apple, just back out of the Maps game. Google has it covered.

Does Google have it covered? How many years has Google had transit directions for Paris, and yet they still don't know the correct location for Châtelet–Les Halles, one of the busiest station in the city. Apple has mapped the station's whole footprint and the precise locations of every entrance and exit.

Now someone will probably try to explain how actually knowing where the stations are and how to get into and out of them isn't actually important.
Score: 1 Votes (Like | Disagree)
Read All Comments

Friday May 22, 2020 3:58 pm PDT by Juli Clover
An app bug is causing some iOS users to be unable to open their apps, with affected iPhone and iPad users seeing the message "This app is no longer shared with you" when attempting to access an app. There are multiple complaints about the issue on the MacRumors forums and on Twitter from users who are running into problems. A MacRumors reader describes the issue:Is anyone else experiencing...
Read Full Article • 117 comments