Apple Maps has been updated with comprehensive transit data in the Edmonton, Alberta area, enabling iPhone users in Canada's fifth most populous city to navigate with public transportation, including buses and trains. 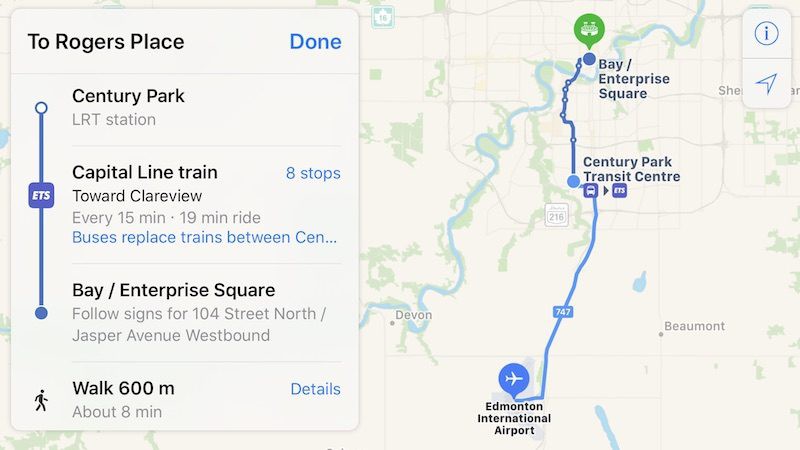 Apple Maps can provide routes for both Edmonton Transit System (ETS) buses and Edmonton Light Rail Transit (LRT) trains throughout the Edmonton area, including to and from the Edmonton International Airport.

For a regularly updated list of cities with Apple Maps transit, visit the iOS Feature Availability page on Apple's website.

Hell yea, Finally I can ditch google maps in my iPhone. Thank you Apple

And you'll be back to Google Maps sooner or later, since Apple Maps are inferior for the most part, especially live traffic.
Score: 5 Votes (Like | Disagree)

noraa
People may give Apple maps **** (some of it deservedly so), but the transit directions blow Google maps out of the water. Of course, they're no good if they're not available in your city - but if they are I highly recommend checking them out.
Score: 4 Votes (Like | Disagree)

And you'll be back to Google Maps sooner or later, since Apple Maps are inferior for the most part, especially live traffic.

Yep. I keep giving Apple Maps a try and keep crawling back to Google Maps.

I want to be able to confidently use and rely on Apple Maps, especially due to the integration which is great and it's visually more pleasing than Google maps, but it keeps failing me.

Just last week it took me to the wrong address in the lower mainland (Vancouver), the address in Apple Maps was 2km away from the real location and traffic was herrendous so it was a real pain (I was unfamiliar with this area). I then entered the exact same address in Google maps which took me to the right location. Notice I said address and not POI, the POI database in Apple Maps is just subpar. I no longer search POIs in it.

Back to Google Maps I go. Smh
Score: 3 Votes (Like | Disagree)

pratax2
Very nice, but it is time for Apple Maps to catch up google on basic functions like turn by turn directions and nearby places (is this that difficult Apple????) in the lot of countries where it is still not available (5 years old and we are still waiting) like South America countries (Argentina chile Uruguay, etc). It is embarrassing that in these regions you can get cars with carplay but cannot use basic functions like gps (and the weird thing is that Tom Tom that Apple Maps is supposed to be based on, has those functions)
Score: 2 Votes (Like | Disagree)

Jmausmuc
LOL. Google Maps has public transit data almost everywhere and every 2-3 weeks you report that like one city has been added to Apple maps.

Google Maps is the best and the time it has saved me with its invaluable traffic data is incredible.
Score: 2 Votes (Like | Disagree)
Read All Comments