The new Google Pixel 2 has bumped the iPhone 8 Plus and Galaxy Note 8 off the number one spot to become the top-performing smartphone camera in DxO Labs' mobile photography tests.

Just a day after Samsung's latest device matched Apple's largest iPhone 8 handset with an overall DxOMark score of 94, Google's newly launched Pixel 2 has now beaten both dual-lens devices with a score of 98, despite its rear-mounted single-camera design. 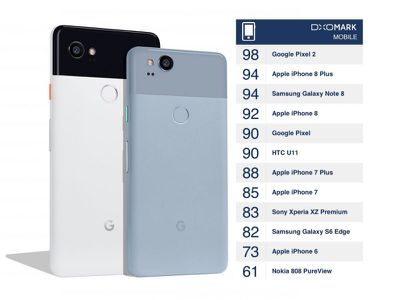 Its top scores in most of our traditional photo and video categories put it ahead of our previous (tied) leaders, the Apple iPhone 8 Plus and the Samsung Galaxy Note 8, despite the Pixel 2 coming in lower in the new Zoom and Bokeh categories. The Pixel 2 is also a major step forward from the Pixel (which was our top scorer when it was released a year ago), moving from 90 to 98.

The reviewers praised the Pixel 2 for excellent video performance, scene reproduction, color rendering, and fast and accurate autofocus, highlighting in particular its "amazing" ability to render detail in both the bright and dark areas of difficult scenes.

One weak spot for the Pixel 2 was said to be exposure in very low light images, which show increased noise in high dynamic range scenes, although excellent exposure and highlight preservation is still in evidence.

Despite performing very well for a single camera phone, the Pixel 2 couldn't outscore the zoom capability of the dual-lens Apple iPhone 8 Plus. The Pixel 2 also sometimes displayed aliasing and moiré artifacts in medium- and long-range zooms.

The reviewers concluded that for just about any photo or video use case, the Pixel 2 recommends itself as the phone camera with the best image quality, with the exception of zoom and bokeh (including Depth and Portrait) that dual-camera smartphones such as the Apple iPhone 8 Plus and Galaxy Note 8 can provide. The Google handset was especially recommended for videographers, since it achieved the highest video score (96) for any device tested by DxO Labs.

The reviewers signed off by noting that their scoring system has "plenty of headroom" to go beyond 100, so we'll have to wait and see if Apple's iPhone X can break that ceiling when it's released next month.

You can read the full DxOMark Pixel 2 camera review and view all of the full-resolution images here. Do you agree with DxO Labs' assessment? Let us know what you think in the comments below.

IMPOSSIBLEMAN
Honestly, all 3 phones produce amazing photos and videos. I love this competition; it forces Apple to keep innovating and breaking new grounds in the phones' photography segment.
Score: 35 Votes (Like | Disagree)

zhandri
So are fandroids that said apple paid for that score also gonna say that google paid a lot for that score? :)
Score: 31 Votes (Like | Disagree)

jabingla2810
Portrait mode with a single lens looks like its much nicer and more accurate than the iPhone with its dual lens.

polbit
I for one am very happy that Google has suddenly become a full-time hardware player. We all benefit from increased competition, and there are very few companies that can compete with Apple. What Google demonstrated yesterday has a lot of potential, and the AI developments are very exciting.

The original Pixel XL almost had me switch to Android. It was a close call, but I ended up returning it for 7 Plus. Unless Pixel 2 XL turns out to have issues, this might be the phone. The way Google Assistant works across the devices, and how good it is (and how fast it is getting better) is probably just as important long-term as what hardware was released. Bold move Google, welcome to prime time.

Kabeyun
The camera’s fine but in real life these top phone cameras are roughly the same. The point of the Google phone is the AI. That’s where it sets itself apart. In a vacuum Siri is inept. Compared to where Google is in mobile AI, Siri’s downright pathetic. Apple’s working hard on this and hiring good people, and they’d better; they’re way behind in this area.
Score: 16 Votes (Like | Disagree)
Read All Comments