Sonos today introduced the Sonos One, an all-new smart speaker with six far-field microphones that allow it to work with digital assistants. 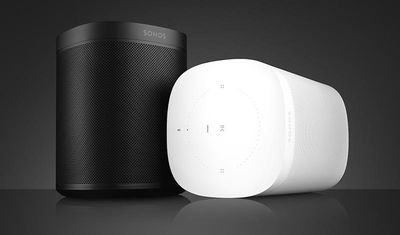 Sonos One can be controlled entirely with voice. At launch, it will support Amazon Alexa in the United States, Germany, and the United Kingdom, including full voice support for Prime Music, iHeartRadio, Pandora, SiriusXM, and TuneIn. Alexa voice control for Spotify will be coming soon after launch.

Google Assistant support will be added in 2018, making the Sonos One the first smart speaker with support for multiple major assistants.

Sonos One can play music from more than 80 streaming services, including popular ones like Apple Music, Spotify, Google Play Music, Tidal, and Pandora. In addition, it supports other traditional Alexa capabilities related to the weather, timers, news and traffic reports, the latest sports scores, and more.


Sonos is releasing a free software update today that will enable many of its existing speakers to be controlled with Alexa as well. In the United States, Germany, and the United Kingdom, Sonos owners can use any Alexa-enabled device like the Echo or Echo Dot to control the speaker with voice commands.

Sonos also announced that it will begin supporting Apple's AirPlay 2 in 2018, making it possible to play any sound from an iOS device on Sonos speakers. Apple users will also be able to control music on Sonos speakers with any Siri-enabled device, such as an iPhone, iPad, and the HomePod once it launches.

Sonos One comes in black or white, weighs four pounds, and has an illuminated LED indicator light to ensure you are always aware when the speaker's microphone is active. The speaker connects to a home's Wi-Fi network, and it also has one 10/100 Mbps Ethernet port for those who prefer a wired connection.

Sonos One will be available starting Tuesday, October 24 for $199 in the United States. Pre-orders start today.

avanpelt
If Sonos is releasing a $199 speaker with voice assistant compatibility built in, you better believe Apple will be lowering the price of HomePod. There is no way Siri is worth a $150 price premium over a comparable Sonos product.
Score: 11 Votes (Like | Disagree)

Blakjack
Sonos just shatted on Apple. There speaker will support both rivals voice assistants and will be 130 bucks cheaper? If the Apple homepod doesn’t have significantly better sound quality It’s going to be a sad day. There is no way whatsoever Apple can support a claim their homepod is worth even 50 dollars more at this point. I understand they are selling it’s sound quality but let’s be real....the Siri function is what’s important in this smart speaker race. And we all know Siri is literal garbage compared to the likes of Google assistant and Alexa. To add to its lack of value, companies aren’t adopting Apple’s HomeKit at a rate that justifies buying the homepod over this new Sonos One. I was so exited about going broke (not really) by buying two homepods. But now I can save some money and buy two Sonos ones and actually get a superior product.
Score: 9 Votes (Like | Disagree)

The Sonis One is basically a Play 1 with extra mics. It’s not even in the same league as the HomePod, which is better than the Play 3 and closing in on the Play 5 for sound quality.

The premium you pay for a HomePod isn’t Siri. It’s for the real-time modeling/sound processing.

Have you heard the HomePod first hand? Curious if you are making assumptions on sound quality based on previews from the internet.
Score: 8 Votes (Like | Disagree)

Finally! Airplay! I hope the airplay update will be available for all existing sonos speakers. It's not much of an issue for me because I can play music from my library off the Sonos app on my phone, but when I want to play off my macbook, I have to airplay through an Apple TV.

The Sonos One sounds interesting to me in particular because I already have Sonos speakers in my house.

Why don't you use the Sonos.app for MacOS?
Score: 7 Votes (Like | Disagree)
Read All Comments