Apple has shared a new page for its upcoming Michigan Avenue store along the Chicago River, set to open Friday, October 20. 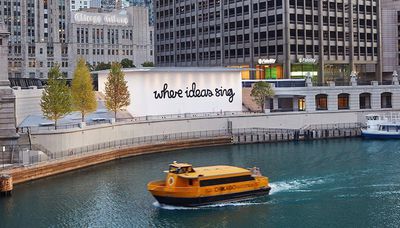 Apple Michigan Avenue via Apple retail chief Angela Ahrendts
Apple starts out with a tribute to the city:

Chicago's creative roots run deep. It's where house music and rock and roll first took the stage. Where world-famous architecture lives. And where contemporary art thrives. Along the Chicago riverfront where the city was founded, we're opening Apple Michigan Avenue. A space for the next generation of creative pioneers to come together, connect, and share their talent.

Apple has partnered with Chicago rapper Saba to create a campaign centered around his new single "Where Ideas Sing" released last week.

"Where Ideas Sing" construction barrier via MacRumors reader Brad Fosler
The so-called "city anthem" was brought to life by public artist Matthew Hoffman, who created a large "Where Ideas Sing" wrapping with lyrics adorning the glass windows of the upcoming store. There's also a message to pedestrians:

On this historic site where the city was first founded, we celebrate the opening of the all-new Apple Michigan Avenue. These lyrics are from "Where Ideas Sing," an anthem written by hip-hop artist Saba and brought to life by public artist Matthew Hoffman. The spirit of this collaboration, like the store itself, was inspired by the vibrant energy of this great city. And here, we’re setting a new stage for creativity in Chicago, right where it started.

Apple currently has a nearby store at 679 North Michigan Avenue that opened in 2003. It will permanently close after October 19.

Read more about the new store in our earlier coverage.

This is one of the few chances to get to a flagship grand opening in the States. It is exciting.
Score: 3 Votes (Like | Disagree)

sidewinder3000
I’ve never heard any Apple executive as excited about a new Apple Store as Angela Ehrands was at the last keynote. She sounded personally invested and almost ecstatic—and for good reason. The site is really exceptional, truly one of a kind, and the results are going to be breathtaking for Apple, it’s customers, and the city. Apple has converted historic buildings beautifully in the past, and has designed underground flagship stores below famous plazas, but for a company who does so many things before anyone else, this insane indoor/outdoor, below-ground/above-ground public/private hybrid built into the bank of a legendary river (that once changed its direction) is new, even for them. This may be the flagship of Apple flagships for quite a while.
Score: 2 Votes (Like | Disagree)

brianvictor7
Was visiting Chicago last month and saw that under construction along the river front. The people who will shop there are going to have an amazing view!
Score: 2 Votes (Like | Disagree)

I'd love to visit, though I'll miss the grand opening. Personally, following House Music since the beginning (well not the Garage House, but since The Belleview Three and their split) I'd love to see Derrick Maye and Juan Atkins at this particular store ... I'd pick their creative brains as much as I could, I know my son would too after a while of hearing their experiences.

I'd love it too, and I live in the Chicago area. But I'll be out of town in Cali during the grand opening :(

But I'll be close enough to Apple Park, I might try to head out for a visit.
Score: 1 Votes (Like | Disagree)
Read All Comments

Saturday May 21, 2022 9:00 am PDT by Hartley Charlton
With around four months to go before Apple is expected to unveil the iPhone 14 lineup, the overwhelming majority of rumors related to the new devices so far have focused on the iPhone 14 Pro, rather than the standard iPhone 14 – leading to questions about how different the iPhone 14 will actually be from its predecessor, the iPhone 13. The iPhone 14 Pro and iPhone 14 Pro Max are expected...
Read Full Article • 311 comments