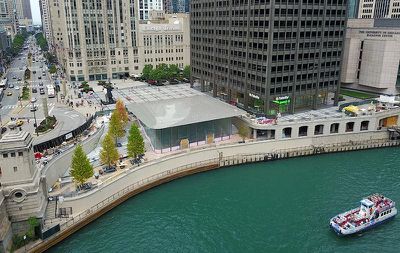 Apple's new Chicago River store via MacRumors reader David Sexton
The two-floor store will be located on North Michigan Avenue, near the historic Michigan Avenue Bridge, along the river's north bank. The flagship location will feature glass walls and a carbon fiber roof, which at one point had a white Apple logo on it, making it look like a giant MacBook Air when viewed from above.

Apple has removed its logo from the roof as of late August, and it's unclear if it will be added back at some point.

The store was designed by Apple's longtime architectural partner Foster + Partners, and pays homage to architect Frank Lloyd Wright's Prairie Style homes in Chicago. Based on plans from 2015, the building spans 20,000 square feet and replaces a vacant food court. Construction has been ongoing for over a year.


A lengthy staircase leads from street level to a walkway in front of the store. The building will also be accessible via elevator.

Ahrendts, speaking at Apple's first-ever event at the Steve Jobs Theater on Tuesday, also said Apple's iconic Fifth Avenue store in Manhattan will reopen late next year. She said the glass cube at street level will eventually be reinstalled, and the lower level will be greatly expanded with a new design.

Apple's nearby store at 679 North Michigan Avenue opened in July 2003. It will permanently close on October 20.

Update: Apple has announced that its retail store at The Summit in Reno, Nevada will be relocating to a new location within the shopping center on Saturday, September 16 at 10:00 a.m. local time. The new location will presumably be larger and updated with Apple's newer store design. (Thanks, Storeteller!)

I hate that name. It's such a consulting business / private equity owned business term, that follows with "town hall meetings". I get that Angela is trying to better describe the fact that Apple is more than just a retailer, but they're definitely not a town and their stores, which is what they are, are not town squares.
Score: 8 Votes (Like | Disagree)

Mike Oxard
Shouldn't you be calling them "Town Squares" instead of "Stores" now?
Score: 7 Votes (Like | Disagree)

Yeah, "We actually don't call them stores anymore, we call them town squares, because they're gathering places."

So, better put in a water fountain or a bar or something. And I ain't sittin' long on those wood boxes! Seriously, there are more comfortable "gathering places" in Singapore International baggage claim area than in any Apple TS I've been in.
Score: 4 Votes (Like | Disagree)

It's quite possible you are being sarcastic, but if not, they are still stores fundamentally. "Town Squares" just sounds like lame marketing to me.

Can you already call something iconic when yet not even opened or not having some history at all? Well, seems so...looking great nevertheless.

dannyyankou
It's a beautiful store, but that segment of the keynote was pretentious and cringy
Score: 3 Votes (Like | Disagree)

Asarien
It's great seeing how far architectural aesthetics has come. Apple Stores couldn't look more metallic and closed off when they first opened 16 years ago.

This environment is beautiful, and the Milan "store" looks even more impressive.
Score: 2 Votes (Like | Disagree)
Read All Comments

Monday November 28, 2022 11:00 am PST by Juli Clover
Apple's upcoming iPhone 15 models will be equipped with Sony's newest "state of the art" image sensors, according to a report from Nikkei. Compared to standard sensors, Sony's image sensor doubles the saturation signal in each pixel, allowing it to capture more light to cut down on underexposure and overexposure. Nikkei says that it is able to better photograph a person's face even with...
Read Full Article • 150 comments

Wednesday November 30, 2022 2:39 am PST by Sami Fathi
Geekbench scores allegedly for the upcoming "M2 Max" chip have surfaced online, offering a closer look at the performance levels and specific details of the forthcoming Apple silicon processor. The Geekbench results, first spotted on Twitter, are for a Mac configuration of with the M2 Max chip, a 12-core CPU, and 96GB of memory. The Mac listed has an identifier "Mac14,6," which could be...
Read Full Article • 252 comments

Wednesday November 30, 2022 10:09 am PST by Juli Clover
Apple today released iOS 16.1.2, another minor bug fix update that comes one week after the release of iOS 16.1.1 and three weeks after the launch of iOS 16.1, an update that added support for iCloud Shared Photo Library, Matter, Live Activities, and more. The iOS 16.1.2 update can be downloaded on eligible iPhones over-the-air by going to Settings > General > Software Update. According...
Read Full Article • 123 comments