The feature can be found on iOS devices in Settings -> General -> Keyboards -> Text Replacement, and in System Preferences -> Keyboard on Macs. Ideally, changes to the text snippets list on one device should sync to all devices logged in using the same Apple ID, but that hasn't always been the case, as MacStadium's Brian Stucki attests: 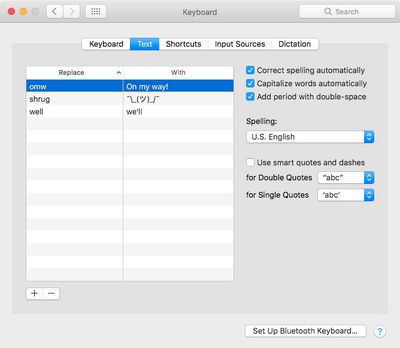 Text replacement syncing is completely broken. Sometimes it works, sometimes it doesn't. Sometimes it will only sync back old snippets that you have deleted. Sometimes the sync will work one direction, but not the other. Every time I ask about this on Twitter, it brings a strong response of similar experiences.

After years of struggling to get text replacement syncing to work properly, Stucki recently decided to set up a weeks-long experiment to test the reliability of the feature across hundreds of Apple devices running various versions of iOS and OS X/macOS. In short, Stucki's results suggested that the text replacement syncing service was "a complete mess" and routinely failed to sync text snippets across devices.

Following the experiment, Stucki wondered why the syncing had remained so poor across several generations of OS, given that other iCloud syncing features such as Apple Notes had improved in recent years. As noted by Daring Fireball's John Gruber, these improvements corresponded with the introduction of the CloudKit API in 2014, suggesting that text replacements had not been upgraded to run on the newer syncing framework.

However, in an update to his experiment posted on Tuesday, Stucki reported that when he made text replacement changes on a Mac running macOS High Sierra, surprisingly his edits were recognized and synced across nearly every device on the same Apple ID, regardless of OS. "Perhaps a clean install of High Sierra is now saving snippets correctly?" he wondered.

Since then, iOS developer Guilherme Rambo has claimed that text replacements do sync through CloudKit on iOS 11 and macOS High Sierra, suggesting Apple has got around to updating the feature to run on the more reliable API. So if you're having trouble syncing text snippets, updating your devices to Apple's latest operating systems might be the best course of action.

Update: An Apple spokesperson informed John Gruber later on Wednesday that an update to move text replacement syncing to CloudKit should be rolling out to iOS 11 and macOS High Sierra 10.13 "in the next month or so".

Synching between my iPad Pro, iPhone 7 + (both running iOS 11.01) and my Mac Pro and MacBook (both running High Sierra) are as hit and miss as they’ve always been.

lexvo
I didn't even know these text replacements were supposed to sync! :p
Score: 3 Votes (Like | Disagree)

Update: An Apple spokesperson informed John Gruber later on Wednesday that an update to move text replacement syncing to CloudKit should be rolling out to iOS 11 and macOS High Sierra 10.13 "in the next month or so ('https://daringfireball.net/linked/2017/09/27/text-replacements-moving-to-cloudkit')".
Score: 3 Votes (Like | Disagree)

Traverse
While I’m glad, I just read posts in the iOS 11.0.1 update article commenting that it wiped their snippets on some devices and not others.

Personally, I find it maddening. After a clean install sometimes only half my snippets would appear, I’d manually redo them in that device and then 2 months later have 3+ copies of the same snippet on each device.
Score: 3 Votes (Like | Disagree)

This is definitely not the case. I’ve been using iOS 11 since the betas and text sync has never worked properly. Even after getting my 7 Plus replaced by Apple and doing a clean install of iOS 11, I still can’t get text replacements to sync. This is by far the most infuriating thing about using iOS for me.

adrianlondon
I .... I'm in shock! I don't know what happened but I imagine aliens are involved.

My text replacements have synced! They're THE SAME on my Macbook and my phone. I just deleted one that was a test and the deletion replicated within a few seconds. I'm too scared to turn my iPad on in case the aliens get stressed out and stop syncing them.

Edit: Turned iPad on this morning. It's still being fiercely independent. iOS9 is giving the finger to iOS11 and High Sierra.
Score: 2 Votes (Like | Disagree)
Read All Comments