iPhone 8 Plus and iPhone X feature advanced cameras with a new Portrait Lighting feature that uses sophisticated algorithms to calculate how your facial features interact with light. That data is used to create lighting effects, such as Natural Light, Studio Light, Contour Light, and Stage Light. 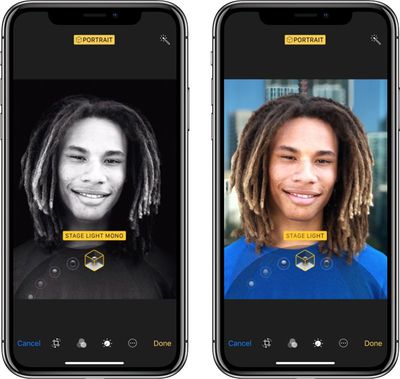 In a new interview with BuzzFeed News reporter John Paczkowski, Apple says it studied the work of portrait photographers such as Richard Avedon, Annie Leibovitz, and Johannes Vermeer, a seventeenth-century Dutch painter, to learn how others have used lighting throughout history.

"We didn't just study portrait photography. We went all the way back to paint," said Apple's marketing chief Phil Schiller.

"If you look at the Dutch Masters and compare them to the paintings that were being done in Asia, stylistically they're different," said Johnnie Manzari, a designer on Apple's Human Interface Team. "So we asked why are they different? And what elements of those styles can we recreate with software?"

Apple said it took what it learned, went into its studio, and spent countless hours shining light on people from different angles.

"We spent a lot of time shining light on people and moving them around — a lot of time," Manzari added. "We had some engineers trying to understand the contours of a face and how we could apply lighting to them through software, and we had other silicon engineers just working to make the process super-fast. We really did a lot of work."

Schiller acknowledged that Apple aims to make a professional camera, ranked the best among smartphones in a recent review, but he added that the company also cares about what it can contribute to photography as a whole.

"We're in a time where the greatest advances in camera technology are happening as much in the software as in the hardware," Schiller said. "And that obviously plays to Apple's strengths over traditional camera companies."

Apple's software advancements allow anyone to simply pick up an iPhone and capture a high-quality photo, eliminating the learning curve that can come with a high-end DSLR camera from the likes of Canon or Nikon.

"It's all seamless; the camera just does what it needs to," said Schiller. "The software knows how to take care of it for you. There are no settings."

Both the iPhone 8 Plus and iPhone X rear cameras been advanced with larger, faster dual-lens sensors, new color filters, and deeper pixels. iPhone X also has optical image stabilization for both the wide-angle and telephoto lenses, the latter of which has a larger ƒ/2.4 aperture that lets more light in.

Read More: How Apple Built An iPhone Camera That Makes Everyone A Professional Photographer

This obviously isn't a gimmick. It's literally using a 3D model of your face to create advanced lighting effects effortlessly for the user. We're talking about a kind of powerful, futuristic application of computational photography that high end cameras are totally incapable of.
Score: 20 Votes (Like | Disagree)

You could get a really nice camera with a lens or two for $1k. Maybe even a proper off camera light.

Can you shove all of that in your pockets?
Score: 18 Votes (Like | Disagree)

I mean this is great, but it's kind of sad that their revenue stream demands the massive resources (in both financial and human capital) that Apple possesses be focused on producing a slightly better camera.

Any company that wants to be successful is going to sweat the details. This is what makes Apple great.
Score: 10 Votes (Like | Disagree)

In what way? Looks good to me, and I direct video for a living.
Score: 9 Votes (Like | Disagree)

ChrisMoBro
They should rename it "Bad Photoshop Filters"
Score: 8 Votes (Like | Disagree)

I mean this is great, but it's kind of sad that their revenue stream demands the massive resources (in both financial and human capital) that Apple possesses be focused on producing a slightly better camera.

Thats one of the main reasons many of us upgrade.
Score: 8 Votes (Like | Disagree)
Read All Comments