As customers around the world begin to unbox their new Apple Watch Series 3 models, some early adopters have started to share their first impressions and unboxings of the device in the MacRumors discussion forums. 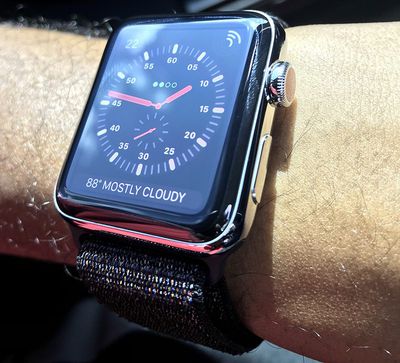 Apple Watch Series 3 with LTE shared by MacRumors reader gatorknight904
We've already seen Apple Watch Series 3 reviews from the media, but opinions shared by regular customers can provide additional insight. We've rounded up some of the comments below, which we've edited very slightly for clarity.

While there appear to be some early activation issues, particularly for AT&T and Verizon customers, those who have been able to set up their Apple Watch Series 3 are generally impressed with LTE connectivity and call quality.

There is a general sense of excitement throughout the entire discussion topic, with many customers upgrading from an original Apple Watch.

Rose gold colored Series 1 (left) vs. gold Series 3 (right) shared by MacRumors reader sinerized
"I have to say, this thing is super fast," said MacRumors forum member roncito. "Way faster than I thought, even coming from my first-generation Apple Watch. And the screen is bright too. I love my Apple Watch all over again!"

"Just picked mine up from my local Apple Store," wrote MacRumors forum member virginblue4. "I haven't done much with it, but there is a definite noticeable speed improvement. Also loving the red crown!"

Unsurprisingly, the red Digital Crown that differentiates the Apple Watch Series 3 with built-in cellular is a subjective matter.

"I must say that the red dot on the Digital Crown sure sticks out like a sore thumb," opined MacRumors forum member largefarrva. "Was hoping it would be a little more subdued in person, but it doesn't appear to be the case."

I picked up an aluminum Apple Watch Series 2 last week when they went on sale because I didn't want an LTE watch and I liked the idea of the sapphire back. It was my first Apple Watch, and honestly I wasn't that impressed. I liked it, but everything seemed a little slow to me. I guess I'm used to the iPhone 7 being nice and snappy. I decided to place an order for an Apple Watch Series 3 and compare the two. If they seemed similar then I'd just keep the Series 2 and return the Series 3. […]

The Series 3 is noticeably much faster. On the Series 2, when I would swipe watch faces, it seemed to lag and sometimes take a few swipes to move to the next face. With the Series 3, it is super fast and smooth. Opening any app is almost instantaneous.

This is the watch experience I was expecting. I will be returning the Series 2.

Keep an eye on the Apple Watch forum section and a new first impressions topic over the weekend for more customer opinions.

hotsauce
I’m sitting here with the Watch 3 LTE on my wrist, AirPods in my ears all while holding my phone. I get a call and I’m so ****ING CONFUSED!
Score: 15 Votes (Like | Disagree)

Ah, the humble cable news, looking for any scandal they can make headlines for.
Score: 11 Votes (Like | Disagree)

44267547
That red dot though is off putting somewhat. But regardless, easily a nice upgrade from the first Generation Apple Watch owners.
Score: 9 Votes (Like | Disagree)

That red dot though is off putting somewhat. But regardless, easily a nice upgrade from the first Generation Apple Watch owners.

I really don't understand what is so bad about the red dot. I like it.
Score: 9 Votes (Like | Disagree)

Nozuka
This is the product i want apple to redesign the most, to be honest...
Score: 9 Votes (Like | Disagree)
Read All Comments