Apple Watch Series 3 reviews are out, and the verdict is mixed about its new built-in cellular capabilities and the impact on battery life. 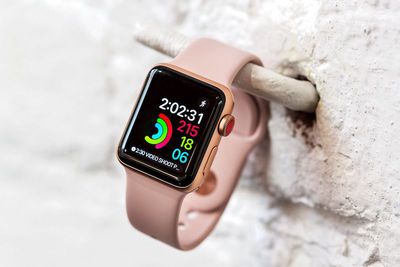 You can't rest easy with the Apple Watch 3 yet, because that seamlessness, that so-called magic, isn't there. The stutters during the handoff from Bluetooth to Wi-Fi to LTE shouldn't happen. The music streaming? It isn't there yet. A built-in podcast streaming option? Also not there. A reliable Siri? Nope, not in my experience.

Apple acknowledged the issue and said it is investigating a fix that will be included in a future software update.


Goode said the one aspect "worth two thumbs up" is watchOS 4, especially for its improved heart rate tracking.

TechCrunch editor Brian Heater said the Apple Watch Series 3's cellular capabilities are "a bit liberating," but he didn't find many scenarios where having a standalone connection was particularly useful.

All nice functionality to have on the go, but in the days I’ve been wearing the watch, I’ve been straining to come up with many scenarios in my own life outside of running where untethering myself from my phone is necessary — or even particularly useful.

On the AT&T-connected models, the cellular connection dropped, calls were often choppy and Siri sometimes failed to connect. On the one that ran on T-Mobile, I experienced several dropped connections.

Stern added that "you're lucky if the battery allows you to roam on cellular for longer than half a day—especially if you're making calls."

Battery life on the Series 3 is excellent. The Watch cleverly defaults to the most efficient connection available; when nearby your phone it'll use bluetooth, move away from the phone and it'll switch to any available known Wi-Fi networks, disconnect from those and LTE will take over. In my usual day, that meant by the time my Watch was back on a charger at night, it still had around 70 per cent battery left.

Audio quality for phone calls on the watch is very good. People I called via the watch said I sounded great, and I could hear them loud and clear. And all of my testing of phone calls on the watch took place mid-day on busy city streets — full of traffic and pedestrians — here in Philadelphia. People won’t know you're calling them from your watch if you don’t tell them.

Although I think most people can skip buying the cellular model, the Apple Watch Series 3 is the first smart watch I can confidently recommend that people buy. While I don’t personally find it attractive enough to replace my wristwatch, the new Apple Watch is a well-designed, durable and easy-to-use fitness tracker for people who want analytics on their workouts and general health (R.I.P., Fitbit).

I'll say it again if you are a serious athlete you don't use an apple watch.

You may not have one at all but if you do 9 times out ten it's a reliable Garmin.

Just hit the track my friends. Go to a marathon my buddies. Check out a triathlon guys.

Lol, "serious athlete". Shame on Apple for not targeting 1% of 1% of the population.
I hear serious professional photographers don't use their iPhone for taking pictures ;). Must be useless for them then.
Score: 29 Votes (Like | Disagree)

Stern added that "you're lucky if the battery allows you to roam on cellular for longer than half a day--especially if you're making calls."

Wait a second she is surprised the watch died when she was using LTE for HALF THE DAY? I’m shocked sometimes how these people are able to hold jobs as tech journalists.
Score: 17 Votes (Like | Disagree)

Stern added that "you're lucky if the battery allows you to roam on cellular for longer than half a day--especially if you're making calls."

Wait a second she is surprised the watch died when she was using LTE for HALF THE DAY? I’m shocked sometimes how these people are able to hold jobs as tech journalists.

Honestly I am not impressed with many of the high profile reviewers from many of these firms. Many posters on this site (forum members) have more of an educated understanding of the technology, the software, and the hardware limitations of devices they post personal reviews on.
Score: 15 Votes (Like | Disagree)

Oh piffle. I'm a forgetful middle aged codger who sometimes forgets my IPhone on the kitchen counter when I'm off to fetch the kids from school. Gimme my damn LTE Apple Watch!

"YOU KIDS GET OFF MY LAWN! I'M CALLING THE POLICE! I CAN DO IT RIGHT FROM MY WATCH!"
Score: 9 Votes (Like | Disagree)

skids929
Screw the Verge..They complained when it didn't have LTE, not they complain when it does have LTE and the issue she brought up will be fixed in a future SW release. And oh BTW the monthly charge is $5 not $10 with Verizon, who is THE largest cell carrier in the industry. The LTE is for someone who wants it for the gym or running, case closed and it did EXACTLY that in her review flawlessly.

Get your facts straight, who cares if you can't take it surfing, quit uptalking and get a real job. Worst review I've ever seen.
Score: 7 Votes (Like | Disagree)
Read All Comments