BuzzFeed News has put together a video of how Apple prepares for an iPhone launch day around the world. 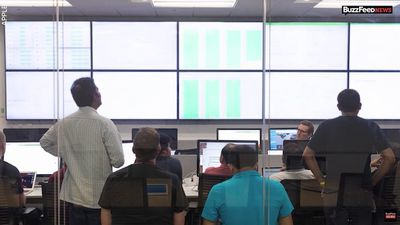 For around three hours, these engineers sat in front of at least 10 TVs forming a larger display, which appears to show the system status of pre-orders in launch countries. One engineer had a map of the world open on his iMac.

"Over half of the orders that night will come in through the Apple Store app," said Apple's retail chief Angela Ahrendts. "We turn the whole world on at once. I think you saw the map with everything lighting up all over the world."

Nguyen said the volume of Apple products is so large that UPS has to set aside time to sort just those deliveries. Apple's launch day haul took up an entire large room, and the products later traveled along miles of conveyor belts.

UPS delivers some of the orders to Apple retail stores, while others arrive directly at customers' doorsteps.

Apple retail stores usually attract long queues of customers on launch days, but the crowds have been smaller for today's iPhone 8 and iPhone 8 Plus launch. Many customers are likely waiting for the iPhone X, which launches November 3.

NIKKG
Congrats to all the 4 people that pre-ordered this dud.
Score: 31 Votes (Like | Disagree)

fizzyfizz
Does Angela Ahrendts ever take her power coat off?
Score: 26 Votes (Like | Disagree)

JilzVT
Very little "behind the scenes" going on here.
Score: 15 Votes (Like | Disagree)

Congrats to all the 4 people that pre-ordered this dud.

Pecking away in your basement on a 2005 PowerBook, are you? Mad at things
Score: 13 Votes (Like | Disagree)

even for all of her accomplishments, I just can't like her

Damn lots of hate for Angela. Don’t know her personally but she seems like a strong successful woman. And last time I checked that was a good thing lol
Score: 13 Votes (Like | Disagree)

Once upon a time, we had that many men sitting behind monitors in one large room to launch astronauts to the moon. Now, we’re waiting up overnight to click an order button.

Boy, we sure have progressed.
Score: 10 Votes (Like | Disagree)
Read All Comments

Thursday September 29, 2022 12:38 pm PDT by Juli Clover
Tony Blevins, Apple's vice president of procurement, is set to depart the company after he made a crude comment about his profession in a recent TikTok video, reports Bloomberg. Blevins was in a video by TikTok creator Daniel Mac, who was doing a series on the jobs of people he spotted with expensive cars. After seeing Blevins in an expensive Mercedes-Benz SLR McLaren, Mac asked Blevins what ...
Read Full Article • 395 comments