The two devices were released in celebration of more than 10 years of partnership between Apple and (RED), with proceeds provided to the Global Fund to prevent the spread of HIV/AIDS in Africa. 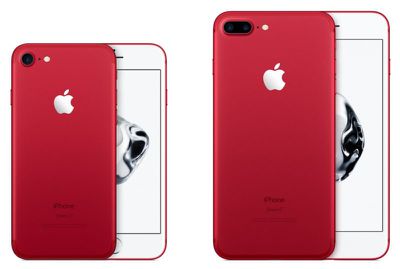 Apple is offering the two devices in 32 and 128GB configurations, with the 256GB models having been discontinued alongside all (PRODUCT)RED devices.

A portion of the sales from Apple's entire (PRODUCT)RED accessory lineup is donated to the Global Fund, a charity that funds AIDS-related programs in Africa.

Ive: "What are we going to do with all this left over red aluminium after we retire the red iPhone 7?"

Tim: (glances at digital crown of Apple Watch) "I think I've got an idea."

ErikGrim
RIP Jet Black. You were too precious for this world.
Score: 16 Votes (Like | Disagree)

Caliber26
I like the red but it looks horrible with the white front. It looks more like a Christmas version of the iPhone.

Would've been a much nicer looking phone with the black front.

ThisBougieLife
I thought the color was pretty cool, but I guess I'm getting "blush gold" for the iPhone 8. If between that and red, I'd rather have the red.
Score: 3 Votes (Like | Disagree)
Read All Comments