The Red Sox are believed to have stolen hand signals from opponents' catchers in games using video recording equipment and communicated the information with the Apple Watch. 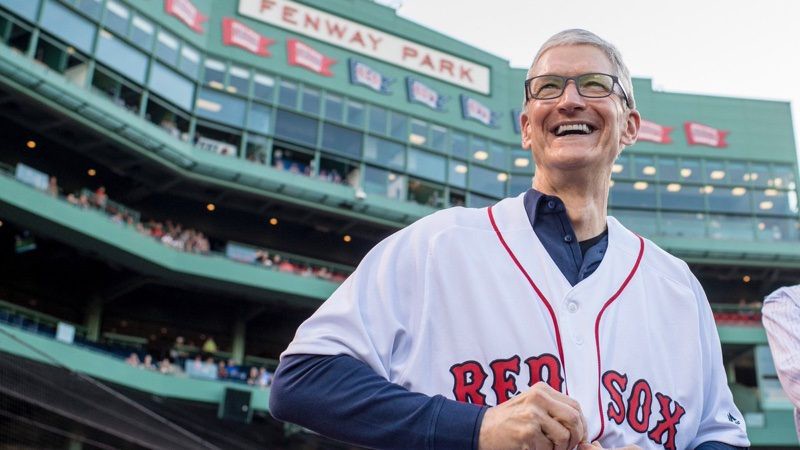 Tim Cook visiting Fenway Park in June
An inquiry into the Red Sox' practice started two weeks ago following a complaint from Yankees general manager Brian Cashman, who caught a member of the Red Sox training staff looking at his Apple Watch in the dugout and then relaying information to players. It's believed the information was used to determine the type of pitch that was going to be thrown.

Baseball investigators corroborated the claim using video for instant replay and broadcasts before confronting the Red Sox. The team admitted that trainers received signals from video replay personnel and then shared them with some players.

The Red Sox told league investigators said that team personnel scanning instant- replay video were electronically sending the pitch signs to the trainers, who were then passing the information to the players. [...]

The video provided to the commissioner's office by the Yankees was captured during the first two games of the series and included at least three clips. In the clips, the team's assistant athletic trainer, Jon Jochim, is seen looking at his Apple Watch and then passing information to outfielder Brock Holt and second baseman Dustin Pedroia, who was injured at the time but in uniform. In one instance, Pedroia is then seen passing the information to Young.

Observing signs is allowed when a runner on second base visually intercepts signals between the catcher and the pitcher and relays that information to the batter, but recording signs with electronic devices is not permitted.

It's not yet known if the Red Sox will face penalties for the scheme, but in light of the signal stealing, the Red Sox have also accused the Yankees of using a camera from the YES television network to steal signs during games.

Update September 18: According to a Major League Baseball source who spoke to Boston Globe reporter Nick Cafardo, the device used to transmit stolen signs was a Fitbit, not an Apple Watch.

jayhawk11
Maybe I'm missing something, but this sounds like the "used an Apple Watch to steal signs" portion of this story could be summarized as "the people stealing signs sent a text message to a person in the dugout. That person happened to be wearing an Apple Watch".

yanki01
Boston/NE are a bunch of CHEETAAAAASSS!!!
Score: 25 Votes (Like | Disagree)

okboy
I thought you were allowed to steal in baseball.
Score: 17 Votes (Like | Disagree)
Read All Comments