Earlier this month, dummy model images began circulating on Chinese microblogging site Weibo that suggested Apple's "iPhone 8" would be available in three colors, including black, white, and an option referred to as "champagne gold" which was said to be closer to a copper color than the rose gold iPhones currently available.

Over the weekend, mobile leaker Benjamin Geskin shared information in a Twitter post from an alleged Foxconn insider, claiming that the internal name of the new iPhone 8 color is "Blush Gold". 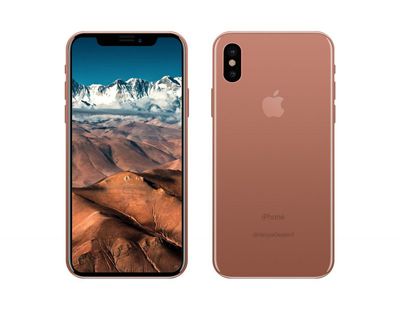 Last Tuesday, KGI Securities analyst Ming-Chi Kuo said all of Apple's upcoming 2017 iPhones would be available in black, silver, and gold, but he made no specific mention of the copper-like color, which began appearing in several videos of dummy iPhone 8 models following the original Weibo post. The potential colors that the OLED iPhone will come in has become more of a talking point since references in the HomePod firmware seemingly confirmed that Apple's radical redesign would be almost bezel-free with a notch at the top for camera components.

The current consensus is that such a design would look best in black, because it would offer a more seamless visual blending of the notch and bezel with the OLED display, especially when the screen is turned off. While the "Blush Gold" render above has a black front, the copper-like back has apparently divided observers, with detractors referring to it as the "Zune option", harking back to Microsoft's brown music player of old. Previously Geskin has claimed that Apple will make the OLED iPhone 8 available in four colors, with a "mirror" shade as a new option, so nothing on the subject is quite yet confirmed.

While the recently released HomePod firmware appears to make no reference to iPhone 8 colors, it has provided information on a range of other details, including the general design of the new phone and advanced facial recognition features. Apple is expected to announce its new iPhone line-up next month.

berrymetal
It's the colour of someone's face while suffocating
Score: 18 Votes (Like | Disagree)

64Gb might be the base storage. It’ll make no sense that Apple will ditch the 256Gb model.
By the way Color looks stunning with black front. I am definitely bidding on one.

Knowing Apple, they’d ruin this with a white front
Score: 16 Votes (Like | Disagree)

rkRusty
50 bucks says it's actually 'Brushed Gold' and someone just got lost in translation.
Score: 8 Votes (Like | Disagree)