Apple today updated its sales policy in Hong Kong to indicate all products purchased at Apple's online and retail stores in the country on and after August 15, 2017 cannot be returned or exchanged indefinitely.

As an exception to the rule, Apple will still honor exchanges for defective products in Hong Kong at its sole discretion.

Apple didn't provide a reason for the policy change, but it's likely a precautionary move ahead of new iPhone models expected in September. The same policy went into effect in Hong Kong on iPhone 7 launch day last year.

Hong Kong is a hotbed for black market electronics due to the lack of import taxes and duties added to foreign goods purchased, as is the case in neighboring mainland China. Scalpers often attempt to illegally smuggle new iPhones across the border to mainland China to make significant profits.

Hong Kong scalper spotted "walking strangely" across the border into mainland China in 2015 via South China Morning Post
When the iPhone 7 and iPhone 7 Plus launched in Hong Kong last year, for example, the smartphones hit the black market for as much as $15,000 in Hong Kong dollars, which was slightly over $1,900 in U.S. dollars.

Apple's standard return policy in Hong Kong is already stricter than in some other countries. For volume purchases of four products or more, the return window is seven days, and there is a 25 percent restocking fee per unit.

Apple will likely revert back to its standard return policy in Hong Kong at some point, but it didn't specify when.

HardRain
Now if only they were exploding Samsung's, could have been charged as a terrorist suicide bomber!
Score: 14 Votes (Like | Disagree)

djeeyore25
Imagine if all of those phones rang at the same time.
Score: 13 Votes (Like | Disagree) 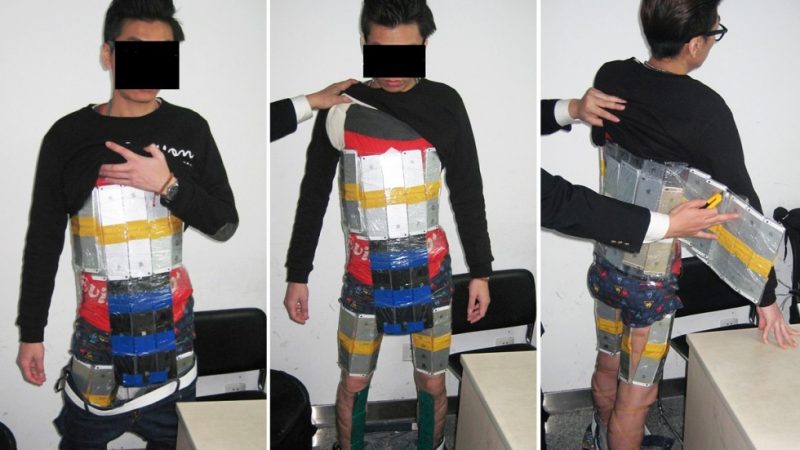 Can Marvel please get this person into the MCU? With Siri as Jarvis?

iapplelove
Just when I thought I've seen it all online... then there are these photos lol
Score: 11 Votes (Like | Disagree)
Read All Comments

Monday March 1, 2021 6:44 am PST by Sami Fathi
Apple faces a new class-action lawsuit that accuses it of deliberately releasing iOS updates that slowly reduce the performance of an iPhone, forcing customers to upgrade their devices. The lawsuit comes from the Portuguese Consumer Protection Agency, Deco Proteste (via Marketeer), which in a statement says that it will proceed with a case against the Cupertino tech giant because it...
Read Full Article • 280 comments

Tuesday March 2, 2021 3:21 am PST by Sami Fathi
NASA's Perseverance rover, which recently made history landing on the surface of Mars, is powered by the same processor used in an iMac more than 23 years old. Image Credit: NASA As reported by NewScientist (via Gizmodo), the rover includes the PowerPC 750 processor, the same chip used in the G3 iMac in 1998. The main chipset is the same; however, there are differences between the...
Read Full Article • 174 comments

Tuesday March 2, 2021 9:32 am PST by Hartley Charlton
Apple will retain the Lightning connector on the iPhone for the "foreseeable future," with no intention of switching to USB-C, according to reliable analyst Ming-Chi Kuo. In spite of much of the industry moving toward USB-C, Apple will not be using it to replace the Lightning connector on the iPhone 13, or indeed on any iPhone model for the time being. In a note seen by MacRumors yesterday,...
Read Full Article • 225 comments