Apple Pay Could Launch in Germany as Early as Next Month

Hints about when Apple Pay is coming to Germany have been few and far between over the last year, with negotiations between Apple and German banks allegedly stalling due to conflicting views over fees and controls.

The last rumor came back in May and suggested that Apple Pay would launch in the country in the fall or winter, but today one MacRumors reader provided us with another potential hint that Apple is gearing up to introduce its mobile payment system in Germany imminently. 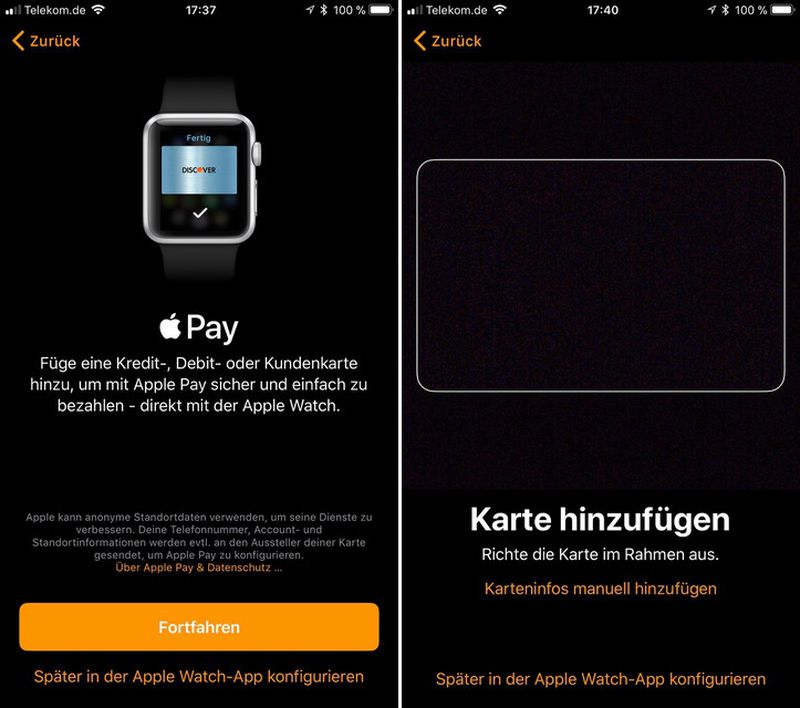 While setting up a new Apple Watch on the fifth regional betas of iOS 11 and watchOS 4, developer Philipp Ebener was presented with the option to add German bank cards to Apple Pay for the first time.

Philipp reports that he wasn't able to register any of his German credit cards with the system, but the fact that the feature has been partially enabled suggests full activation could come with the official public launch of both operating systems.

Apple will release the final version of iOS 11 and watchOS 4 at its next major event in September, where it is expected to debut new iPhone models and a new Apple Watch with LTE for a standalone cellular connection.

sunny2k1
I can confirm Germany, Netherlands and Austria in February. More new countries (e.g Poland) and banks for the first mentioned countries to follow with iOS 11.3.
Score: 14 Votes (Like | Disagree)

bruinselmann
Good, it's only been three years since I bought a new iPhone in anticipation of this feature.
Score: 11 Votes (Like | Disagree)

I think so too. N4p84 just copied whatever sunny said. At least the Dutch tech press totally ignored it this time.

Well thats exactly what I kept saying over and over again. Its very unhappy that Apple didnt announce anything tonight. Was looking forward to Apple Pay as well but they keep disappointing us.

Sunny see my twitter posted that 3 hrs ago :) and the other guy still think I’m a fake looool

You are absolutly right. I still think you are fake. You know Karma is a bitch. Dont pretend to know stuff you dont. It always comes right back at you.
Score: 7 Votes (Like | Disagree)

And that's what rumors are... "a currently circulating story or report of uncertain or doubtful truth".
So no need to complain, if some people just doubt it's validity.
Especially in times of "fake news" and stuff.

Let's just all be nice to each other and wait what will happen tomorrow. ;)

Of course you are right. That’s what rumors are. But this guy didn’t give any information. He just repeated some parts of what sunny told us and then added he doesn’t know it’s just a guess.

The screenshots he showed us obviously are bs you can easily recreate them. Noticed that between those two screenshots passed two minutes? Why do think is that? That’s about exactly the time it takes to change your region on the iPhone. Just fake.

Then he said in the evening he’ll show us Deutsche Bank Apple Pay. Now he announced he is not gonna show anything cause he does not have ****. Same goes for loads of other stuff he was talking on his Twitter.

Next check when Hans last signed in and when n4p84 created his account. Matches perfectly.

Then he says he lives in Austin, Tx. Yet his English is beyond the level of a 9 year old which tells me he is laying again. If you are 33 living in the US you should be able to make a full sentence without a mistake. He makes like theee mistakes each sentence. Check his Twitter.

.de? Why? He lives in the US so how does this add up? I checked DENIC to see on whom the site is registered. The person lives in Ober-Ramstadt. Now guess what... it’s only a jump to Frankfurt where Hans is from.

If you want more just check his Instagram iemmix. Picture of him and the locations he has been to. Looking at that guy it from his looks it matches the name according to DENIC on whom the website is registered to. By looks I mean the name sounds Arabic or from the east and fits the way the guy looks. And again he is himself writing hashtags like #hessen under his photos which again supports what I said about him being Hans. Hans from Frankfurt, Frankfurt is in Hessen etc. This is another indicator for me that the guy who owns the above mentioned domain is n4p84 which proofs that he is lying about where he is from. And just about three days ago he was in Darmstadt which again is even closer to Frankfurt then Ober Ramstadt.

Now I can go on and on about this but in the end it adds all up to one point. This guy is Hans.

Why to tell rumors even if they are false? Because sunny made pretty clear that it is very likely that AP is gonna be announced today and Hans wants a share of Sunny’s “award”. Hans wants to be seen as a insider that knows stuff we don’t. Just trying to be important. That’s all.

What if I said Apple Pay is gonna launch today 100 % in Germany, Netherlands, Austria and Poland. It’s that simple to create a rumor but I cannot back up at thing I just said. Same with Hans and n4p84.
Score: 7 Votes (Like | Disagree)

Apple Pay Cash hasn‘t from been coming to Europe so far, because Apple isn‘t allowed to charge fees - neither on credit nor on debit cards - because of the PSD2 rules. Apple nor any banking may not charge extra fees for transactions to the virtual Apple Pay Cash Card.

Apple Pay Germany seems to be „in the final stages“ of development. The girocards are now able to use the ELV system as well as the international used Vpay/Maestro system. My source confirmed me that Apple Pay can be launched „any day“ now. There are also first rumors for Austria popping up...
Score: 7 Votes (Like | Disagree)
Read All Comments