Apple is accepting donations to the Canadian Red Cross through iTunes to help people affected by ongoing wildfires in British Columbia. The province declared a state of emergency in July. 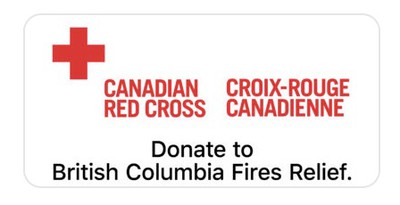 As of August 6, the BC Wildfire Service said 132 wildfires were currently burning in the province, with a total of 900 wildfires since April 1. As of August 9, over 3,600 personnel were working to fight the fires, which have forced some residents to evacuate due to dangerous conditions, including poor air quality.

Apple says iTunes credit cannot be used to make a donation. The fine print also says donations may not qualify for a tax deduction.

Via: iPhone in Canada

Wasn't aware of this occurring in British Columbia. Will be donating.

Donate directly to a non-profit in the area. Red Cross notoriously squanders money. Look into their wastes in Haiti and New Orleans. Millions of dollars that went nowhere. I wish Apple would stop featuring them.
Score: 13 Votes (Like | Disagree)

btrach144
Stop donating money to the Red Cross. Apple really needs to stop this partnership. Red Cross is corrupt and wastes millions of dollars each year. Less than 90 cents of a dollar actually go directly to those in need. Anything less than 90 cents is typically seen a poorly run charity that likely has 6 and 7 figure executives running it.
Score: 10 Votes (Like | Disagree)

merkinmuffley
Is Apple - a company with $262 billion sitting in off shore accounts matching the donations? If they want to match donations maybe they could soak their cash in water and drop it on the fires.
Score: 4 Votes (Like | Disagree)

Stop donating money to the Red Cross. Apple really needs to stop this partnership. Red Cross is corrupt and wastes millions of dollars each year. Less than 90 cents of a dollar actually go directly to those in need. Anything less than 90 cents is typically seen a poorly run charity that likely has 6 and 7 figure executives running it.

I agree. I recall my Dad, who was a medic in the Korean War, telling me how bad the Red Cross was. As an example: He was on a ship during the war, and the Red Cross was charging the GIs for a cup of hot coffee!! Find a local BC charity instead, so your donation goes to those in need.
Score: 4 Votes (Like | Disagree)

Stop donating money to the Red Cross. Apple really needs to stop this partnership. Red Cross is corrupt and wastes millions of dollars each year. Less than 90 cents of a dollar actually go directly to those in need. Anything less than 90 cents is typically seen a poorly run charity that likely has 6 and 7 figure executives running it.

Wow, I had no idea until I googled how much the CEO makes. Over $650,000! Jeez, hopefully Apple finds a better partner when it comes to these sorts of donation efforts. Also, why can only Canadians donate? Victims in Haiti, Japan and other countries were able to receive support from people from around the world. Why is Canada any different?
Score: 2 Votes (Like | Disagree)

Wasn't aware of this occurring in British Columbia. Will be donating.

Donate to the Red Cross or directly to BC charities. Whichever you choose, British Columbians like myself really appreciate the support. Thank you!

P.S. The BC Government also supports having donations sent to the Red Cross and includes a link to them for donations. Here's the July 14th article on the government website:
https://news.gov.bc.ca/releases/2017TRAN0200-001311
Score: 2 Votes (Like | Disagree)
Read All Comments