Apple shares are currently trading for between $161 and $162, eclipsing the $160 mark for the first time ever and setting a new all-time intraday high. The nearly 2 percent rise in Apple's stock price gives the company a market valuation of around $835 billion on its path to becoming a trillion dollar company. 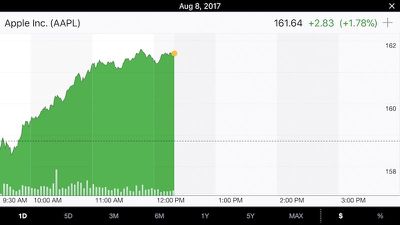 Apple's previous all-time high in intraday trading was $159.75, set after its third quarter earnings results beat expectations. Apple's record close is $157.14, which could be topped today after less than one week. Conversely, Apple's 52-week low is $102.53, set September 12, 2016, five days after its iPhone 7 event.

With focus shifting to the so-called iPhone 8 upgrade supercycle expected later this year, AAPL price targets range between $140 and $208.

Dave245
But I thought Apple was doomed and Tim Cook should be fired because he's no good for Apple :rolleyes:
Score: 10 Votes (Like | Disagree)

Timothy Donald Cook is such a underrated CEO.

Cooks achievements and making Apple the most profitable company in the world. Here are some Cook statistics:

The iPhone installed base has grown by 500M users.

The iPad installed base has grown by 175M users, sales have increased by 15%.

The Mac installed base has grown by 50M users.

Apple is earning more than $6B per year of revenue through app sales via the App Store.
Apple successfully made the difficult jump from a paid music download model to streaming and is approaching 20M paying Apple Music subscribers.

Those Apple employees who are due a fixed number of shares will be happy about this!

I'm happy about this, and I don't work there. I guess the pundits here on MR who claimed that Apple's on the ropes and Tim is leading the company into oblivion because of the lack of a new Mac Mini might not be expert CEOs in waiting after all.
Score: 5 Votes (Like | Disagree)

ArtOfWarfare
My stock portfolio is up 15% in 3 months.

Pretty sure I'm doing better than Warren Buffet at this whole stocks thing.

(Of course, I'm basically just gambling, so I only have $533 worth of stocks that I personally manage. One stock of AAPL. One stock of TSLA. Feels better to own them than to say, "Darn, I knew that'd happen, I should have bought some stock.")
Score: 5 Votes (Like | Disagree)
Read All Comments