Following its June quarter earnings results, which beat Wall Street expectations for both revenue and iPhone sales, Apple's stock opened at an all-time high of $159.52 today. Apple also opened with a market cap of nearly $830 billion, moving it closer to becoming a trillion dollar company. 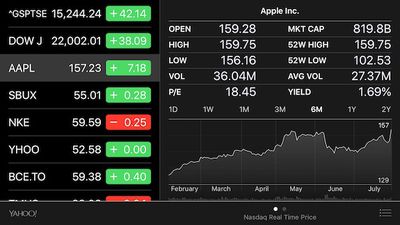 AAPL is currently trading in the $156 to $157 range after falling back a few dollars since the opening bell, but it's still up over 4 percent.

Bryan Bowler
In early 2007, my wife thought I was crazy when I invested one year of my modest annual salary in AAPL. “It’s too big of a risk”, “I can’t believe you invested such a large amount in a computer company”, and more. However, I had recently converted over to Apple (from PCs) about 9 months earlier and I saw what a difference Apple was in the personal computing world. And then there were rumors and the eventual announcement of the iPhone. I realized the true visionary Steve Jobs was and I really liked the direction Apple was headed. I truly believed it would be the best investment I would ever make in my life...and it was.

It’s been a great ride over the last 10 years. I’m still on-board with that original investment and I look forward to seeing where things go from here.

thewebb
If only I invested in AAPL 10 years ago... or even had money to invest 10 years ago.
Score: 9 Votes (Like | Disagree)

Apple's current success is entirely due to Steve Jobs & Jonny Ive. Tim Cook has done **** all apart from stear the ship in the same direction.

You're making an anecdotal statement without backing it up with Facts. Here are some facts regarding Tim Cook and his overall achievements with in the last year:

The iPhone installed base has grown by 500M users.

The iPad installed base has grown by 175M users. Which is now up 15% in sales.

The Mac installed base has grown by 50M users.

Apple introduced Apple Watch, the company's first wearable product. Approximately 18M Apple Watches, a device positioned as an iPhone accessory, have been sold to date. Sales of Apple Watch were up over 50 percent in the June quarter 2017, and it's the number one selling smartwatch in the world by a very wide margin.


Apple is earning more than $6B per year of revenue through application sales via the App Store.

Apple successfully made the difficult jump from a paid music download model to streaming and is approaching 20M paying Apple Music subscribers.

Apple continues to push forward with Apple TV. The company is approaching 10M units sold since the device was updated in 2015.

By 2030 Chinese phones will have made huge gains in the market, I'd guess. Better to buy index funds for long-term growth rather than focusing on specific companies.

By 2030, nobody will be using phones anymore.
Score: 7 Votes (Like | Disagree)
Read All Comments