Things are never boring in the world of iOS gaming, and that's true once again this week. The majority of my time over at TouchArcade this week has been negotiating and scheduling all sorts of upcoming news under embargo that I wish I could talk about as I hate sitting on really awesome stories. But, in the interest of keeping everyone happy, I'd just keep your eyes glued to these roundups over the next couple of weeks for some pleasant surprises in the world of mobile gaming.


Picking up where we left off last week, there have been further developments in the mystery of what in the world is actually happening with the Five Nights at Freddy's series. The game series has merchandise in both Walmart and Target stores, as well as a movie on the way, but the fate of the sixth installment is still up in the air. This week FNAF creator Scott Cawthon reiterated on Reddit that he's stepping away from the series partly due to the community negativity and how discouraging it is. It's ultra plausible, and makes a ton of sense, particularly as FNAF has grown beyond Cawthon's wildest dreams, but... I'm not quite ready to believe that there won't be a Five Nights at Freddy's 6.


As far as roguelites (A "roguelite" is not quite a "roguelike," although the internet loves arguing about the definition of both. Typically they're games with random elements and permadeath.) are concerned, 868-Hack is one of the very best on the App Store. We absolutely loved it when it hit the App Store back in 2013 as it's unbelievably clever how developer Michael Brough combined classic roguelike dungeon crawling elements with faux-hacking. The game has lingered on the App Store for years now, but this week was updated with loads of new content titled "868-HACK: Plan B" which is unlocked via a $2.99 IAP. Whether or not you spring for the IAP, at least check out our review and consider giving the base game a shot. I don't think you'll regret it.


My personal favorite hidden gem that hit the App Store this week is a lightweight 4X game titled A Planet of Mine. I get more in depth on how the game works over on TouchArcade, but the basic gist is the developers did an unbelievably fantastic job taking all of the various elements that go into a 4X game like Civilization, but streamlined into a format that can work on a touchscreen. This recommendation comes with the caveat that the game has a bit of a learning curve and not much of a tutorial, so definitely stick with it long enough to learn it. The good news is it's totally free to try, with the "full" game available as a one-time IAP unlock for $4.99.


Better late than never, Street Fighter IV: Champion Edition hit the App Store this week. We have an in-depth review, but it's basically a 2017 refresh of Street Fighter IV Volt which brought a shockingly competent port of Street Fighter IV to mobile. It has surprisingly workable virtual controls, MFi support, online multiplayer, and at a single premium purchase of $4.99 is free of gotchas and other freemium shenanigans that seem to permeate every other popular mobile fighting game.


In Hearthstone news, a patch hit this week that nerfed the Rogue quest card The Caverns Below. Completing the quest and unlocking the powerful reward of The Crystal Core now requires five of the same minion being summoned, up from four. This should slow down the deck significantly, which is a very good thing. Also, you can pre-order 50 packs from the upcoming expansion, Knights of the Frozen Throne, for $49.99. Aside from just getting them free by spending in-game gold, these pre-order offers are the cheapest way to get a bunch of new Hearthstone cards. 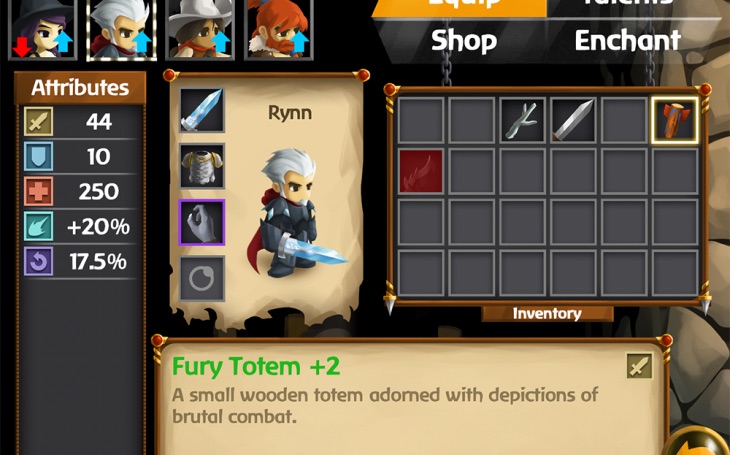 Battleheart and Battleheart Legacy are easily among my all-time top iOS games, as both of them provide some unbelievably great RPG gameplay in a format that works incredibly well on the touchscreen. (I seriously can't recommend them enough.) The games' developer, Mika Mobile, teased some information on the upcoming sequel, and I can't wait. Battleheart 2 goes back to the core concepts originally explored in Battleheart, which is a departure from the full-featured RPG that Battleheart Legacy was. The sequel is deep in development, and Mika Mobile is famous for taking their time and not releasing something until it's 101% completed, so it might be a while until we see the game, or get another update on its progress.


Phoenix II is a favorite over on the TouchArcade Forums, and from the looks of it, it's going to be among the first games that take advantage of the new 120Hz display of the iPad Pro. Additionally, it'll support the wide color gamut of recent iOS devices, which isn't something we see often in games. We liked Phoenix II quite a bit in our review, and if you're looking for a great, totally free, entry in the bullet hell genre you really can't do much better than Phoenix II (particularly if you've got a new iPad Pro). This update will hit on July 27th.

Last, but not least, we're working on growing our presence over on Twitch, and as part of that we're on the hunt for iOS developers and publishers who also stream iOS gaming-related things on Twitch. If that describes you, please reach out to us or tweet @hodapp and we'll add your channel to our auto-host list. The dream is to turn the TouchArcade Twitch channel into somewhere you can go to always see someone playing iOS games, even when we're not actively streaming.

That's it for me this week! If you like these roundups be sure to check out TouchArcade for all this news, and way more. Alternatively, you can always swing into our Discord chat server to find people talking about iOS gaming 24/7.