Apple recently purchased expensive production equipment to produce the rigid flexible printed circuit board for the iPhone 8, reports The Korea Herald. Apple doesn't plan to use the equipment itself, but is instead leasing it to suppliers to ensure it can get the components it needs for the iPhone 8 amid rumors of production difficulties.

The equipment cost Apple "tens of millions of dollars" and will be used to create the aforementioned circuit boards, which are a key component that connect parts like the iPhone's display and camera. A rigid flexible printed circuit board (or RFPCB), which combines both flexible and rigid technologies in a single board to conserve space, is reportedly more difficult to produce than standard rigid or flexible PCBs. 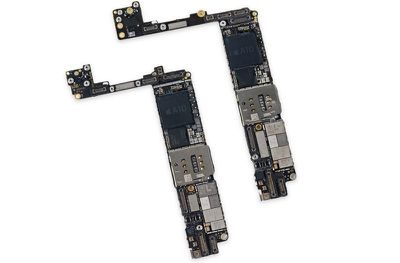 iPhone 7 logic board, image via iFixit
Apple made the purchase after one of three suppliers it planned to source parts from backed out of the deal. Interflex and Youngpoong Electronics, two Korean companies, are said to be producing the components going forward.

"One of the three suppliers recently decided to back out," a source told ET News on condition of anonymity, saying that the supplier is a Taiwanese manufacturer.

The exact reason why the Taiwanese supplier withdrew from the deal with a big client Apple was not revealed. But sources say the firm may have felt a pinch on the tricky production and strict quality requirements along with low profitability.

With one supplier pulling out of the deal, Apple decided to make sure the remaining suppliers can meet capacity. "To fill the loss, Apple is supporting the other two suppliers, both Korean, to beef up production," said The Korea Herald's source.

Rumors have suggested Apple is struggling to produce several of the new iPhone's components, including the 3D sensor and the display lamination process, which many analysts believe is going to lead to some delay in production ramp up.

KGI Securities analyst Ming-Chi Kuo, who often accurately predicts Apple's plans, believes production ramp up could be delayed by a month or two, which means the iPhone 8 could be available in limited quantities with Apple unable to meet demand until late in 2017 or early in 2018.

robinp
What on earth is 'rigid flexible'?
Score: 26 Votes (Like | Disagree)

Can't blame the editors. Seems the term has been in use for quite some time. This manufacturer page explains it: http://www.flexiblecircuit.com/product-category/rigid-flex/

This. "Rigid flex" is a hybrid circuit board built as one unit with both rigid and flexible sections. Like:

Is it possible there could be a delay, yes. But to label the launch in trouble or a train wreck, seems far fetched to say that yet. Apple wouldn't put themselves in a position where the iPhone would not launch accordingly without reason. I Think these rumors have tendencies to skew ones thinking of what we really understand when it comes to production and what someone tends to believe is reality .

But ultimately, I would rather have there be a delay to ensure this new iPhone is manufactured properly versus having it be a complete debacle. I think Apple would feel the same, as it's their goal to deliver the best possible product.

Agree. "Nothing is F'd here, Dude."
Ready to deliver or not, [at the keynote] they'll definitely show us a gorgeous new 8 video, talk features, demo working devices. And we'll all fall over ourselves and set our alarms to happily wake to place our orders. Grins on our faces.

While I'm here - I so miss the excitement and camaraderie that were the launch day lines. Of all the criticism slung Angela's way, that's the one I do think she got wrong. I feel some of Apple's soul died with that business decision. It was such a good time. A differentiator. An event whose optics - from a brand perspective - were immeasurable. Untouchable. Every local news station would send a crew to their Apple Store to cover the lines. Launch days are now so sterile. Uneventful. Like so much of our social media experience: solitary. Isolated. Waking at 3am to place an online order couldn't be any further removed from the launch day line experience. And the "convenience" argument just isn't worth it. For me. At all.
Score: 7 Votes (Like | Disagree)

Yup, noticed this too. I think many online publications have lost the concept of quality editing. They just want to rush content out to get hits. Sad.

And for them to use the words twice in the article... clearly the author doesn't understand what "rigid" means, unless it means something other than what we all think it does?

I did not make up the term "rigid flexible." It's what this particular PCB is called. It's an "RFPCB," or "rigid flexible printed circuit board." As someone already explained, it's a PCB that uses both flexible and rigid technologies for better space management.
Score: 7 Votes (Like | Disagree)

What on earth is 'rigid flexible'?

It's an oxymoron. /s

You beat me to it. I was going to ask the same thing.
Score: 7 Votes (Like | Disagree)
Read All Comments