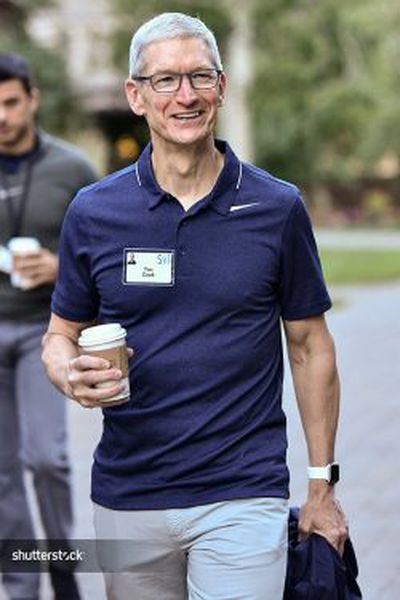 Many well known tech and media moguls attend the Sun Valley event, which is essentially a retreat and is invitation only, but meetings and discussions at the conference are kept under wraps so it's unlikely we'll hear details on anything that goes on. In years past, Cook and Cue have kept a low profile during the week long event.

Described as a "summer camp for billionaires," the conference includes activities like rafting, cycling, and golf, and because it brings so many major media executives together in one place, it's been credited as the catalyst for major deals like the AOL and Time Warner merger, Walt Disney's acquisition of ABC, Google's purchase of YouTube, and Jeff Bezos' acquisition of The Washington Post.

Apple has been taking a more direct approach to media in recent months with its ever-growing interest in original content, so it's no surprise to see Cook and Cue at the event once again.

Nunyabinez
Tim's Apple Watch seems to be working pretty well, he looks like he's in pretty good shape for a man of his years.
Score: 22 Votes (Like | Disagree)

44267547
Wow. The Eddy Cue and Tim Cook comments are ridiculous. Making snide comments about two individuals nobody has ever met and yet so easy to throw insults over the Internet, isn't it?
Score: 12 Votes (Like | Disagree)

Rogifan
When is Eddy going to get the boot? Pushing Apple into original content is nuts. He’s going to waste a fortune on content no one wants to watch.
Score: 12 Votes (Like | Disagree)