A limited number of Apple employees began moving into the new headquarters in April, but the video shows that construction is still well underway. Among the highlights are a closer look at the main circular building, Steve Jobs Theater, the visitor center across the street, and the overall landscaping.

Roberts also flew his drone over the historic Glendenning Barn, which Apple has now completely reassembled after carefully taking it down and pledging to move it to a new location due to construction of Apple Park. 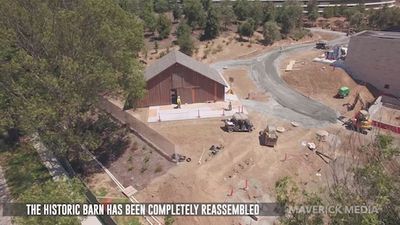 Glendenning Barn, a historic landmark in Cupertino, has been situated on Apple Park's property since the early twentieth century. After taking over the site of HP's previous campus, Apple reportedly dismantled the redwood barn piece by piece, including every plank, nail, and crossbeam, and made careful notes on its construction.

The drone video reveals that Apple has successfully recreated the barn, although a few of the redwood planks appear to be brightly colored, indicating they might not be original. Apple reportedly stockpiled redwood salvaged from an old grove in case any damaged planks needed to be replaced.

When finished, Apple Park will be surrounded by some 9,000 trees, with a large pond, walking trails, benches, and a fitness center for employees.

Jsameds
As a Brit, I find if funny how Americans refer to things built in the early 20th Century as 'historic' :D
Score: 83 Votes (Like | Disagree)

As a Brit, I find if funny how Americans refer to things built in the early 20th Century as 'historic' :D

I'm a Brit too, but historic doesn't have to mean "old". It means "important in history". Nine Eleven was a historic event. Now if they'd written "historical", that would be a different matter. (Someone should tell the BBC this -- they're constantly mixing up the meanings of both words.)
Score: 28 Votes (Like | Disagree)

kemal
I like it when historic things are brought back. Next, bring back the historic Mac Pro modular tower.
Score: 15 Votes (Like | Disagree)
Read All Comments

Sunday February 5, 2023 6:06 am PST by Hartley Charlton
A new version of the Mac Studio with the "M2 Ultra" chip is unlikely to arrive in the near future, according to Bloomberg's Mark Gurman. In the latest edition of his "Power On" newsletter, Gurman explained that since the upcoming Apple silicon Mac Pro is "very similar in functionality to the Mac Studio," Apple may wait until the release of M3- or M4-series chips to update the machine, or...
Read Full Article • 494 comments