Apple could make its upcoming OLED iPhone available in four different shades, including a new "mirror-like" reflective version not seen before in previous models. That's the latest claim from mobile leaker Benjamin Geskin, who shared an example image via Twitter over the weekend showing what the new color option could resemble.

The image the leaker provided is just an iPhone in a third-party reflective case, but it offers some idea of what a purported "mirrored" handset might look like if Apple decided to offer such a design as part of its color options. 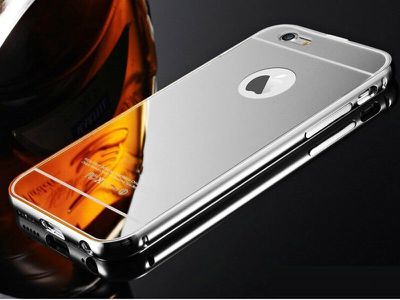 Geskin offered no details regarding the source of his information, so there's no way to verify the claim, but it follows predictions from KGI Securities analyst Ming-Chi Kuo earlier this month that Apple's flagship iPhone model could come in limited "boutique" color options, alongside more typical "S" cycle updates to the existing iPhone 7 line-up.

No clarification was forthcoming regarding the other three color options for the redesigned iPhone, but it's possible some of them could be plucked from the existing six iPhone 7 shades currently available, which include jet black, black, gold, silver, rose gold, and (PRODUCT)RED.

Last week's prominent and perhaps most controversial rumor was that the new iPhone may not include TouchID at all, with Apple favoring some sort of face recognition technology as a replacement security feature. The rumor muddied the waters regarding the future of Apple's fingerprint recognition, with previous rumors appearing to indicate that the company had come up with a solution to integrate TouchID in an OLED display, with facial recognition used as an additional security feature via new 3D sensors in the front-facing camera.

Otherwise, Apple's major iPhone redesign is said to include some form of wireless charging, a faster A11 processor, and a glass body. The 5.8-inch "iPhone 8" is expected to be announced in September.

Jsameds
Anyone who owned one of those original iPods knows that the mirrored finish is not a good idea..
Score: 57 Votes (Like | Disagree)

This will be a fingerprint magnet...

Haven't you heard? There is no Touch ID fingerprint sensor on the new 'Mirror-like' iPhone, but it will include a fingerprint magnet.
Score: 44 Votes (Like | Disagree)

Nadir98
This will be a fingerprint magnet...
Score: 31 Votes (Like | Disagree)

Sunny1990
[Fingerprint Magnet]This will look nasty after one minute of use
Example :-


It will be hell difficult to maintain that shiny back.

fitshaced
Samsung were thinking about this too but decided it was too risky to have people stare into the flames.

Yeah that’s a bad one. I can do better.

Sunday February 5, 2023 6:06 am PST by Hartley Charlton
A new version of the Mac Studio with the "M2 Ultra" chip is unlikely to arrive in the near future, according to Bloomberg's Mark Gurman. In the latest edition of his "Power On" newsletter, Gurman explained that since the upcoming Apple silicon Mac Pro is "very similar in functionality to the Mac Studio," Apple may wait until the release of M3- or M4-series chips to update the machine, or...
Read Full Article • 527 comments