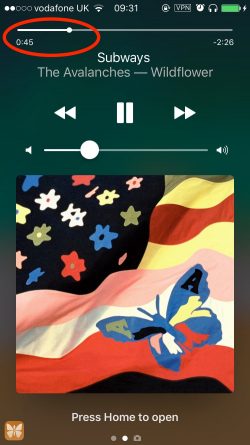 Spotify has quietly added the ability for users to adjust the playback position of the currently playing track directly from the iOS lock screen.

The option to adjust the progress of a playing track – also known as audio scrubbing – from the lock screen has been a feature of Apple's native Music app for some time, but the ability has been missing from Spotify until very recently, as noted by Reddit user kermitch.

The API that enabled third-party app developers to add audio scrubbing to the lock screen was introduced in iOS 9.1+, but it looks as if Spotify only got around to including it with the most recent update to the app on July 4.

It's worth noting that only Spotify Premium subscribers can scrub tracks, so users on the Free ad-supported tier won't see any change to their lock screen when playing tracks via the app.

MattJessop
Praise be! Praise be!

I thought that this was a limit with iOS until I realised that I could scrub with Overcast.

GreyOS
The most basic feature Spotify doesn't have on iPhone is songs being grouped into albums under the artist view in your library. Nope instead you get one long list of the artist's songs.

Every time I see a post like this, I'm amazed at the basic features that Spotify or Pandora have lacked all along that Slacker has had essentially from day one.


And yet, I happily continue to choose to give Spotify my money each month. Some things just matter more than the ability to skip ahead in a track.
Rating: 1 Votes
[ Read All Comments ]