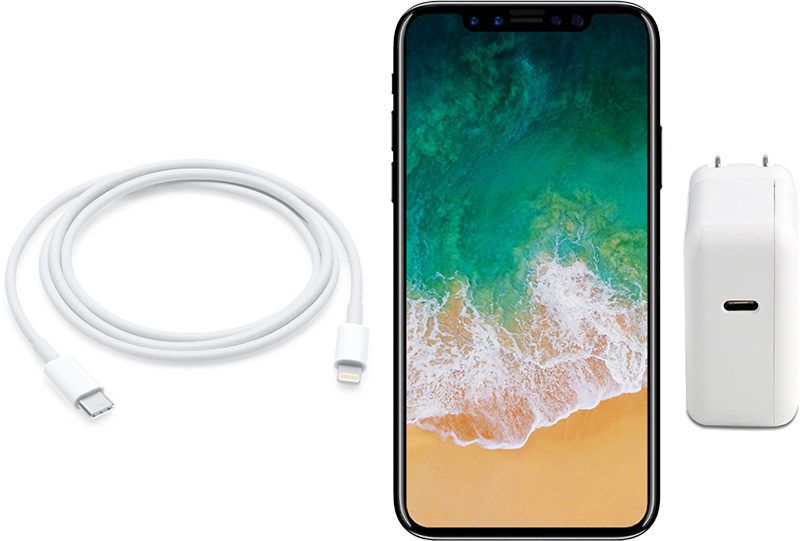 "iPhone 8" mockup by Benjamin Geskin for iDrop News
Lending credence to that rumor, Barclays analyst Blayne Curtis today in a research note said the so-called "iPhone 8" will come bundled with a 10W power adapter with a USB-C connector and an integrated USB-C Power Delivery chip.

Curtis said the USB-C Power Delivery chips built into both the iPhone and 10W power adapter will be supplied by Cypress Semiconductor. The research note suggests it'll be the same CYPD2104 chip used in the new 10.5-inch iPad Pro.

An excerpt from the Barclays research note distributed to clients, obtained by MacRumors and edited slightly for clarity:

We believe that in the iPhone 8, Apple likely includes Cypress Semiconductor's USB-C Power Delivery chip in the phone and an additional chip within the power brick in box (likely a new 10W, which would use a more integrated solution with Cypress Power Delivery).

Like the new 10.5-inch and 12.9-inch iPad Pro, the so-called "iPhone 8" would be capable of fast charging with a Lightning to USB-C cable connected to the new 10W power adapter or Apple's 29W USB-C power adapter for MacBook.

Given the "iPhone 8" is expected to have around a 2,700 mAh L-shaped two-cell battery pack, faster charging would be a welcomed addition. The device is also widely rumored to feature wireless charging on top.

iamgalt
They need to use USB-C on both sides of the cable, and not USB-C to Lightning. Just my opinion (and a lot of other peoples based on comments I've heard and read throughout the past couple years)
Score: 19 Votes (Like | Disagree)

zorinlynx
Why can't they just move to using USB-C on the iPhone itself? Sure there will be some wailing and gnashing of teeth for a bit, but it'll finally standardize phone charging across the industry.
Score: 17 Votes (Like | Disagree)

Queue the complaints from MR readers that they'll have to switch from all their current iPhone chargers. Faster charing is horrible!!!!!

JTravers
As an Apple user, I don't care about cable compatibility with other manufacturers. I want compatibility across my Apple devices. So I hope Apple keeps lightning, so I can use the same cable to charge my family's iPhones, iPads, and AirPods. Making the new iPhone different will just cause cable confusion, lol!
Score: 15 Votes (Like | Disagree)

OldSchoolMacGuy
Queue the complaints from MR readers that they'll have to switch from all their current iPhone chargers. Faster charing is horrible!!!!!
Score: 15 Votes (Like | Disagree)

They changed the original connector after 5 years. The current connector has been around for 5 years. Its about time to upgrade everything to USB-C. It will also encourage companies to start making USB-C a standard for every device so Macbook Pros can be used with more devices without dongles sooner rather than later.