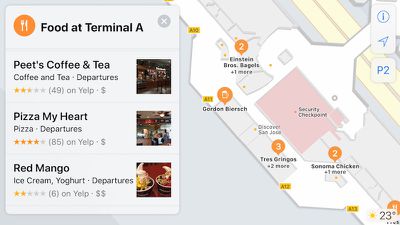 Indoor maps will provide detailed floor plans of major airports and shopping malls around the world, allowing iOS 11 users to plan ahead.

Apple Maps users can browse by floor, or search for shops, food, drinks, or restrooms in a specific terminal. Tapping on a restaurant, for example, brings up a detailed place card with photos, hours, and additional information.

Likewise, at shopping malls, Apple Maps users can zoom in to view the exact location of stores, restaurants, restrooms, escalators, elevators, and stairs on each floor. Users can also filter stores by categories such as clothes, shoes, accessories, beauty, food, and drinks, with detailed place cards for each.

The feature is only available in iOS 11, which is currently in beta testing. The second developer beta was released on Wednesday, and a public beta will be released later this month. The software update officially launches in the fall.

Maps can't show me how to get to the end of my street half the time so good luck with this waste of time.

If you need a map to get to the end of your street, I think you are in WAY worse shape than Apple ever will be. o_O
Score: 12 Votes (Like | Disagree)

DTphonehome
Good feature but Apple is always a few years behind Google with stuff like this.
Score: 10 Votes (Like | Disagree)

joiwomcow
Apple truly are the Bing of mapping services.
Score: 10 Votes (Like | Disagree)

All this is merely to mask the fact that Apple is at the end of the line of innovation in main-stream computers. They have only the froth to work with now having deserted the pro and prosumer clientele. When millennials consider smart phones uncool it will all go down the pooper. And that can happen any day now probably when someone pays Beyonce or Taylor Swift and bazillion dollars to say they think social media is for dorks.

Having a bad day there buddy? :rolleyes:
Score: 9 Votes (Like | Disagree)

Ries
Directions to starbucks:
Please take emergency exit #4, then proceed along runway #2 for 200m, turn right and cross runway #6 and enter Terminial #1 through emergency exit #12, starbucks is now to your left.
Score: 6 Votes (Like | Disagree)