The Swiss-based company said it had been testing its VPN service for four months with the help of over 10,000 members of the ProtonMail community, and the group was ready to make ProtonVPN available to everyone starting Tuesday. 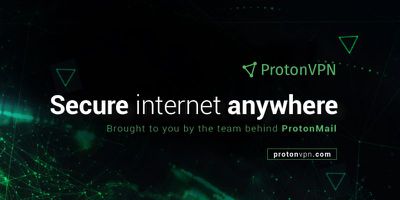 The Proton group said they were motivated to create ProtonVPN to combat increased threats to online freedom, such as the recent repeal of Obama-era rules designed to protect consumer internet browsing history, calls by British Prime Minister Theresa May for increased online surveillance, and the attempts by the U.S. FCC to dismantle net neutrality.

"In the past year, we have seen more and more challenges against Internet freedom," said ProtonMail Co-Founder Dr. Andy Yen, "now more than ever, we need robust tools for defending privacy, security, and freedom online.

"The best way to ensure that encryption and privacy rights are not encroached upon is to get the tools into the hands of the public as soon as possible and widely distributing them," said Yen. "This is why, as with ProtonMail, we're committed to making a free version of ProtonVPN available to the world."

The group says it has worked to make the best possible VPN service by addressing many of the common pitfalls with existing VPNs. Features therefore include a Secure Core architecture that routes traffic through multiple encrypted tunnels in multiple countries to better defend against network based attacks, a no logs policy backed by Swiss law, as well as seamless integration with the Tor anonymity network. Headquartered in Switzerland, the VPN is also outside of E.U. and U.S. jurisdiction and is not a member of the fourteen eyes surveillance network.

The free tier includes servers in three countries and usage on one device, but bandwidth speeds cannot be guaranteed. The Basic tier costs $4 a month (billed as $48 a year) and includes access to all 112 ProtonVPN servers across 14 countries, high speed bandwidth, and usage on up to two devices, while the Plus tier ($8 per month/$96 per year) offers the highest bandwidth, connection on up to 5 devices, Tor servers, and access to Secure Core data networks hosted in Switzerland, Iceland, and Sweden. The Highest tier ($24 a month/$288 a year) includes a ProtonMail Visionary account.

ProtonMail began crowdfunding in May 2014 and launched in March 2016, led by a group of scientists from CERN and MIT who aimed to deliver an easy-to-use end-to-end encrypted email service with freely available open source code. Earlier this year, the team launched a Tor-based site to make ProtonMail available to users in regions under the oppression of strict state online censorship.

They're end to end encrypted in Sweden, one of the last bastions of privacy and security in the Western Hemisphere.

Switzerland. I wouldn’t call it a “bastion of privacy and security”, privacy-unfriendly laws have been enacted there too.

What about ProtonMail? Starting to want to get off gmail. Are the encrypted email providers secure?

They haven’t been hacked, at least not that we know of. Regardless of the security considerations, ProtonMail stores all emails encrypted with your private key. Gmail does not.

However, the user experience leaves a lot to be desired. You don’t get IMAP/Exchange access, their web client isn’t as powerful as Gmail's and the mobile apps are a bit disappointing. I personally get the feeling that they are constantly getting distracted with side projects and neglect the development of their core email service, case in point this VPN service. For an email service that prides itself for email encryption, it is pathetic that you still cannot send encrypted emails to non-ProtonMail users. They also have no import/export capabilities, meaning that you cannot extract your emails (other than manually forwarding each email) in case something happens to them or you decide to leave.
Score: 6 Votes (Like | Disagree)

What about ProtonMail? Starting to want to get off gmail. Are the encrypted email providers secure?

They're end to end encrypted in Sweden, one of the last bastions of privacy and security in the Western Hemisphere.
Score: 4 Votes (Like | Disagree)

Do you guys really trust all these VPN services that are starting to pop up? I'm sure it's far more secure and private vs my ISP, but how can one really know for sure their privacy is kept hidden.

iapplelove
Do you guys really trust all these VPN services that are starting to pop up? I'm sure it's far more secure and private vs my ISP, but how can one really know for sure their privacy is kept hidden.
Score: 2 Votes (Like | Disagree)

For an email service that prides itself for email encryption, it is pathetic that you still cannot send encrypted emails to non-ProtonMail users.

How would a non-Proton user decrypt an email?
Score: 2 Votes (Like | Disagree)

The rule of the thumb should be don't trust anyone or anything.

I have a rule of thumb as well: Don't trust crazy people.
Score: 2 Votes (Like | Disagree)
Read All Comments